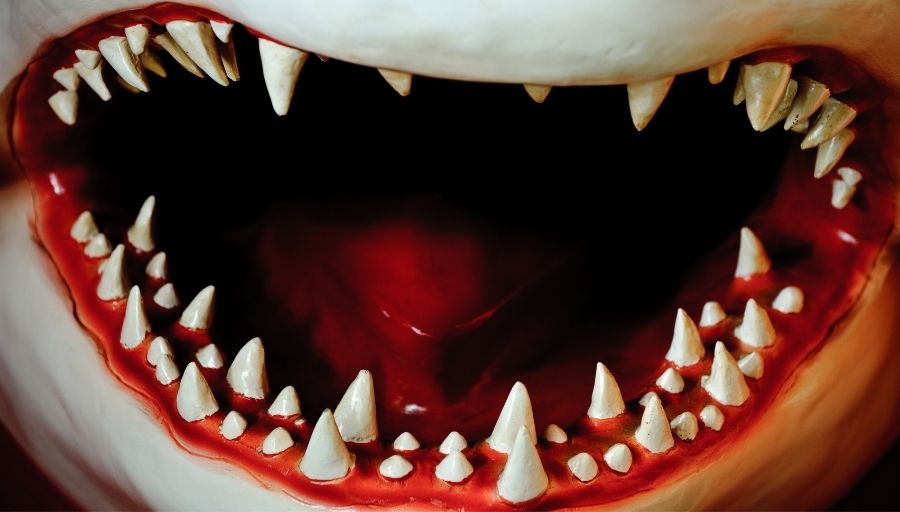 In the animal kingdom, sharks are taken as the most dangerous creatures. Looking at the teeth of a shark is enough to strike fear in people, and it’s no surprise that the word “Shark” is widely used to mean brutal. When it comes to feeding, teeth are not the only weapons, but tongues have an important role too, isn’t it? While we may know about the habitat and the behavior of the species, little has been known about the shark tongue.

This blog looks at the uses of sharks’ tongues, their feeding habits, and some other interesting facts about them.

Do Sharks have a Tongue?

Basihyal is the name of the tongue that sharks have. The shark’s tongue can be found on the bottom of its mouth. It is small in size, relatively thick, and has an immovable cartilage piece. It is pretty much useless to most sharks. Some sharks, like carpet, cookie-cutter, and bull sharks, use their teeth to rip their prey.

What are the uses of Shark Tongue?

Different types of sharks use their tongue for other purposes. Most sharks cannot move or roll their tongue like humans, but a few, like carpet sharks, cookie-cutter sharks, and bull sharks, use their tongues to rip their prey off.

What is Exceptional about the Tongue of a Shark?

Can Sharks use their Tongue to Taste?

No, like humans’ sharks do not have taste buds on their tongues, so obviously, they can’t taste anything with them. The taste buds of sharks are located under a special lining inside their mouth, so their tongue does not play any role in food tasting.

Sharks can eat almost everything as they are not picky eaters, so their taste buds are not highly sensitive. It can only let sharks know if the food is okay to eat.

Can a Shark Bite its own Tongue?

Their proprioceptors (a sensory receptor that gives complete and regular information about the position of the limbs and other body parts) send signals to the brainstem. Then the brainstem informs the position of their tongue or whether the tongue is chewing, biting, the size of the food, or even if they are ripping off their prey.

When it comes to eating, sharks are not picky eaters. They can pretty much eat everything. Some sharks are carnivorous and eat other fishes like seals, dolphins, sea lions, rays, and turtles, while some eat plankton.

Different sharks have different feeding habits. Sharks are highly efficient and intelligent creatures and can easily adapt to their surroundings and can eat whatever is available, including hazardous substances such as garbage, oil, charcoal, plastic, and fabrics.

Being toothless sharks, these sharks don’t eat other marine animals and they feed primarily on plankton, that’s why they are also known as Planktivore sharks. Most of them don’t use their teeth or tongue to taste or chew instead they swallow them whole. The species are also referred to as filter feeder sharks. Out of all species, however, there are three sharks known to filter feed. Those are the whale shark, the largest species alive today, the basking, and the megamouth shark.

How Much Food do Sharks Eat?

With their large body sizes, it’s common to think that sharks eat too much, but generally, they just eat between 0.5 – 3.0 percent of their total body weight daily. They can’t overeat because they don’t chew their food and swallow them whole, so it takes much time to digest.

Sharks have been a constant source of curiosity for human beings like how some specific parts of their bodies work as compared to humans. The tongue of a shark is pretty much useless to them as they don’t have any control over their tongues and as for their feeding habits, they can eat almost anything that comes in between their jaws. However, each species of shark has a food preference, so, there is so much yet to learn about these mysterious and amazing creatures.