The skin of the shark is unique in many ways. It is characterised by its grey colour and the contrast between its slippery appearance and its rough tactile texture.

Dermal denticles are present on the shark’s skin and give it the rough texture that has earned it its primary human function as sandpaper. These are small structures that resemble hard, grooved teeth but are actually placoid scales.

They have a central pulp cavity, dentine and an outer layer of enamel. These strengthen and protect the skin of the shark against injury. They also aid in streamlining the fish while it glides through the water as they reduce turbulence. This is done by directing the water through the grooves and thereby decreasing the friction of the water against which the body travels. 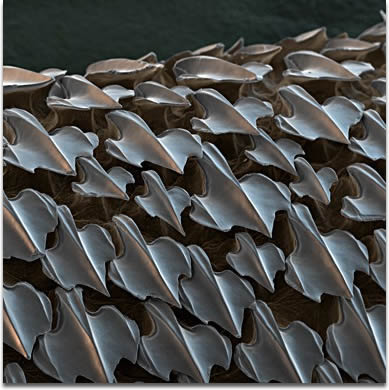 These teeth are what makes the shark feel rough and what has led to the use of shark skin as sandpaper. The skin is so rough, in fact, that softer animals brushing against it can be badly injured. These denticles’ spines point towards the tail, so the rough effect is best felt by moving one’s hand over the body from the tail to the head.

They are arranged in a mosaic pattern which surrounds the body of the shark like a helix. This acts as a supportive corset. Because the sharks have no skeletal bones, the muscles used for swimming are attached directly to the inside of this corset. This saves energy, allowing them to swim faster and further without tiring.

Shark skin is usually grey in colour, with the top of the body being darker than the underneath. This means that the shark’s body camouflages with the dark depths of the ocean when viewed from above as well as the lighter surface of the water when viewed from below.

Sharks living on the bottom of the ocean and feeding off small crustaceans are usually browner in colour, aiding them to blend in with the sand in which they hunt. This sophisticated method of camouflage means that these stealthy hunters are able to approach prey without being detected until it is too late, a necessary skill for their survival.

The skin of the shark has to be very thick in order to assist it to retain heat and to support the muscles that are attached to its inner layers. The largest living shark, the Whale Shark, boasts skin of about 10 centimetres in thickness.

Sharks, like all animals, have been designed to suit their habits and habitats exactly. Their skin is no exception. It displays ingenuity in design and function and ensures that these creatures are well suited to their aquatic homes and hunting lifestyle.