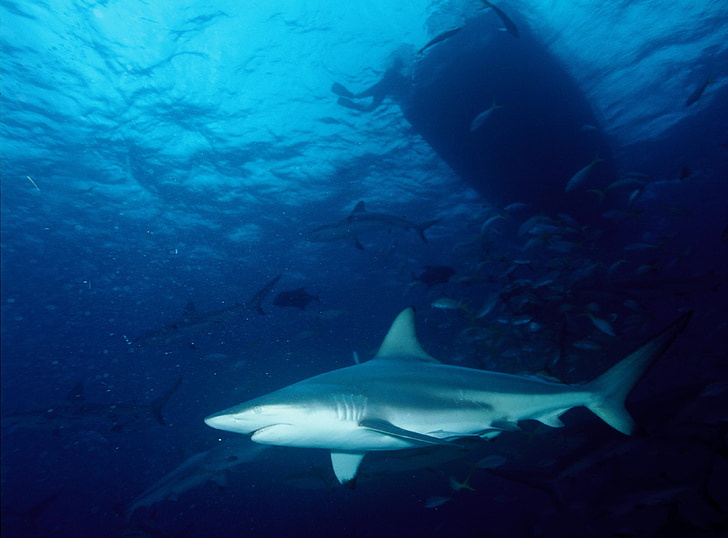 Sharks are generally pictured as gigantic sea creatures that kill and eat everything that comes their way. Known as the opportunistic feeder, sharks must be weighing a lot, then? Well, it’s obvious. But how much does a shark’s weight need to be figured out, isn’t it?

Sharks are fascinating sea creatures dwelling in the world’s oceans for centuries; they existed long before the dinosaurs and even the trees. To date, more than 500 species of sharks have been discovered, and there are so many yet to be found. No doubt, the deep oceans hold so much in them.

With that said, each species of shark is different from the other. They come in all varying sizes, shapes, colors, behaviors, and qualities. Similarly, the food preferences also differ from species to species. This makes it very clear that each species of sharks will have a different weight, as per their body size and food consumption.

So, no exact figure can be given about how much do sharks weigh in general. There are shark species as small as that can fit in your hand and as large as a school bus, about more than 60 feet in length.

However, when you look at the figures, most shark species weigh around 1000 to 4500 pounds, but it can be less or more depending on the particular shark type.

The great white shark is regarded as the most dangerous shark, and it has a relatively large size as compared to other species. On average, they grow to a size of 12-16 feet; however, they can reach up to 21 feet when fully grown.

Weight-wise, they are most likely to weigh between 1,500 and 4,000 pounds, but some have been documented to weigh more than 5,000 pounds.

As you can see by their food choices, Great white sharks are carnivorous predators who feed on fish, dolphins, whales, sea turtles, and seabirds.

How much do tiger sharks weigh?

Named for their vibrant color pattern, read about what do tiger sharks look like.

Moving forward, there are records of Tiger sharks being up to 18 feet long, which makes them among the largest species of sharks. However, on average, they grow to a size of 10 to 14 feet.

Their diet consists mainly of marine animals, sea birds, and occasionally terrestrial animals and garbage floating in the ocean. As a predator, the tiger shark is renowned for its incredible appetite and will eat almost anything. When it comes to how much they weigh, you will find them mostly getting 850-1400 lbs.

How much do bull sharks weigh?

A bull shark is another species that tops the list of most aggressive sharks. On average, they reach a length of 8 to 10 feet, whereas female species are said to grow a bit larger, a maximum of 11 feet. The weight of an adult bull shark typically ranges between 200 and 500 pounds.

Do you know the fact that the bull shark is one of the few species of shark that can prosper in both saltwater and freshwater? Their additivity favors them to live in any environment. Get to know about where do bull sharks live.

How much do Mako sharks weigh?

The mako shark grows to around 10 ft in length and weighs between 130 and 300 pounds as an adult. Whereas an adult of the largest size can reach 15 feet in dimension and weigh more than 1,100 pounds. Though Mako sharks are not believed to be aggressive, they can attack and cause serious injury when provoked. Talking about their diet, they prey on a variety of fishes, sea turtles, and other marine creatures.

Highly intelligent, Mako sharks are said to be the fastest species and also have the ability to jump out of the water. Find out where they live.

How much do basking sharks weigh?

Basking sharks come in the category of the largest species of sharks alive today. When you look at their diet, you will find out that it is one of the species that feed mainly on plankton. The other two plankton-eating shark species are the megamouth shark and the whale shark.

Where an average basking shark grows up to 30-40 feet, the maximum they are able to reach is 45 feet in length. One can imagine the weight of this giant-sized shark.

Nothing less than 4 tons, a fully grown basking shark can weigh anywhere between 4-4.5 metric tons. Given the conditions, it can exceed more.

Read out here more about the size and diet of basking sharks.

As we have seen that each shark species has different weight ranges, and therefore, no exact figure can be given. Just like the way size differs for each species, the same goes for weight. However, when you look at the average, it is anywhere between 1000 to 4500 pounds, and it may fluctuate as per the individual shark.