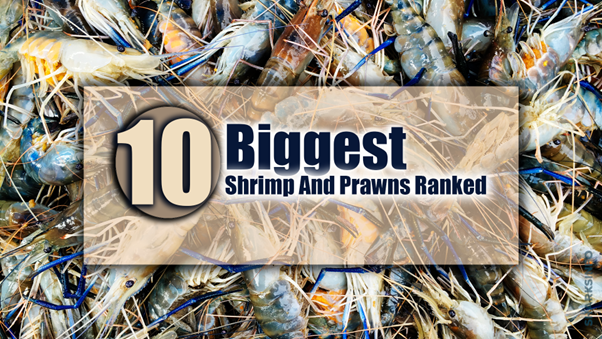 Shrimps and prawns are the members of decapods crustaceans, they look somewhat similar to each other. The main difference between the two species is that prawns have longer legs than shrimps and have 3 sets of claws and are native to freshwater habitats whereas shrimps are smaller in size and belong to aquatic habitats.

The White Leg Shrimp are native to the Eastern coast of the Pacific Ocean. A water temperature of 20o C is highly preferable and usually live at the depth of 78 meters. These shrimps are blue to whitish colored, about 23 cm in length, and can live for about 2 years. They are omnivorous species that feed on plants, small fishes, and microorganisms.

Due to their large size, the Chinese White Shrimp are harvested in China and used as a favorite seafood. They are commonly found in Chinese White Shrimp, in the Yellow Sea, and along the coast of Korea. The species are about 17 to 19 cm in length and live at the depth of 90 to 180 meters. However, environmental factors and human activities can cause a decline in the population of shrimps in the adult stage.

They are the species of saline waters that are found along the Gulf of Mexico and the Southern coast of the Atlantic Ocean. They can have a maximum length of 18 to 20 cm in length and live at the depth of 30 to 80 meters. The most preferable water temperature for white shrimps is 3o C.

Pink shrimps are the popular species of Bermuda islands, the Gulf of Mexico, and along the Eastern coast of the United States.  They are about 28 cm or 11 inches long and live at the depth of 70 meters or even more. During the breeding season, the Pink shrimps release millions of eggs which have a life span of just 2 years.

The Deep Water Rose Shrimp is native to the Mediterranean Sea and the Atlantic Ocean. These species mostly prefer sandy and muddy floors of the ocean and are found wandering at the depth of 20 to 700 meters. The female shrimps are larger than the male shrimps – female shrimps are about 19 cm in length and males are 16 cm long.

The largest prawn in the world is the Giant Tiger Prawn which can reach a maximum size of 33 cm and weigh about 10 ounces. The species are native to Southeast Asia, Australia, the Philippines, and the United States. They have black to orange coloration that looks like a tiger. These prawns live in warm waters for only 3 years.

These species of prawns are found in the warm waters of the Northern Pacific Ocean, at the depth of 46 to 488 meters. They have a maximum length of 25 to 30 cm and weigh about 0.25 pounds. These feed on plankton, shrimps, and sea carcasses. California Spot Prawns have a life expectancy of 6 years or even more.

The Kuruma Prawn prefers sandy and muddy bottoms of the Indian Ocean and the South Western Pacific Ocean at the depth of 90 meters deep. They have an average length of 25 to 30 cm and prefer plants and small creatures in their diet.

They are common to tropical waters of the Indo-Pacific Ocean, Southeast Asia, India, and Northern Australia. The length of the Giant Freshwater Prawn is 30 cm or even more. They have green to brownish coloration and feed primarily on oligochaete and zooplankton—these species bury themselves in the mud during the daytime and hunt actively at night.

The Eastern King Prawns are native to the coastal waters of Eastern Australia and are the most popular seafood of this region. They prefer soft sandy sediments, usually at the depth of 220 meters. They have an average length of 30 cm. The species feeds on plankton, worms, shellfish, and organic matter.

The shrimps and prawns are small creatures that are of different sizes, some are smaller in size whereas the other species are a bit larger. The small-sized species are cooked and served on your dining table, but the larger species are used for commercial purposes as well.