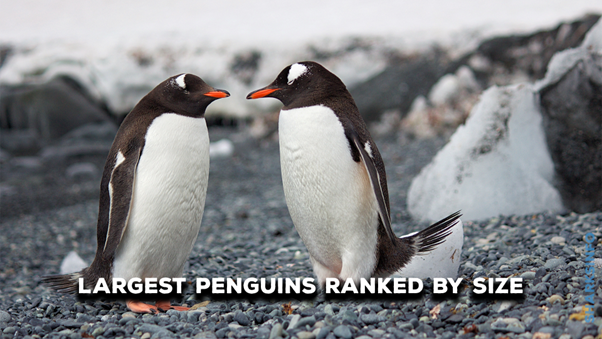 Who doesn’t love penguins, with their unique walking style and distinctive markings on the body? While they all share the similar walk and physical appearances, they surely differ in their body size. There are some large penguins and then there are some small ones. Here, we are going to enlist some of the largest penguins according to their size. Let’s take a look.

The Largest Penguins Ranked by Size

Let’s see which penguins have been ranked largest among the others based on their size.

Crowned as the largest penguin in the world, the Emperor penguin can grow upto as much as 45 inches and can weigh between 77-88 lbs. With a big head, streamlined body, thick and short neck, and flipper-like wings; they are natives of the Antarctic Mainland. They can swim at high speed while holding their breath to catch their food. This ability increases their maximum life span.

Bagging the second position in the list of the largest penguins in the world, the King penguin resembles the Emperor penguin in its physical appearance. But their orange markings on the upper chest and head tell them apart from the Emperor penguins. They have adapted to survive in harsh conditions and are native to Antarctica, sub-Antarctic islands, South Georgia, and other nearby islands of the region.

Aptenodytes patagonicus is their scientific name. Their size can reach upto 35-37 inches and they can weigh around 30-35 lbs. Their huge appearance makes them second on the list.

Number three on the list with a maximum size of 29-35 inches and weight of 18 lbs, Gentoo penguins are known as Pygoscelis papua, scientifically. They are natives of the Falklands, South Georgia, and Antarctica. They are famous for their breeding for which they migrate to ice-free areas and their swimming speed which is 22mph underwater. On their black head, they have black stripes which are their identifying feature.

Ranging from 26-30 inches in size and 18 lbs in weight, Royal penguins are next on the list. They can be identified from far away because of their black and yellow crest on the white and black bodies. Another interesting feature is that their feet are pink in color with dark brown claws. Their home is in Macquire and Campbell islands. They have been scientifically named Eudyptes schlegeli.

Megadyptes antipodes, also known as Hoiho, have pale yellow eyes so the name yellow-eyed. They also have a bright yellow band running from their eyes to the back of their head, making it easy to spot them among others. They can grow as much as 26-30 inches and can weigh between 11-13 lbs. They can easily be found in New Zealand, Campbell Island, Auckland, and Foveaux Strait.

Found in coastal Argentina, the Falkland Islands, and Chile, the Magellanic penguins prefer warm weather. They are scientifically named Spheniscus magellanicus with distinct two bands on their bodies; one is wide black while the other one is of the horseshoe shape. They can stand tall upto 24-30 inches with a weight of 8-14 lbs.

One of the most common types of penguins with bright round rings around their eyes, for which they are noted and identified. They are placed on number seventh on the list because they can grow upto 28 inches and weigh as much as 13.2 lbs. Also known as Pygoscelis adeliae, these penguins are native to the mainland of Antarctica.

With a height of 28 inches and weight of 14 lbs, the Macaroni penguin is endemic to Falkland Island, New Zealand, Australia, and South Africa. These migratory birds can be identified by spotting that orange or yellow crest on their head and their infamous orange beak. They are also known as Eudyptes chrysolophus.

In the scientific community known as Spheniscus humboldti, these penguins are named after Alexander von Humboldt who was an explorer. Humboldt penguins can easily be identified as they have a horseshoe-shaped black mark on their chest. They are native to the Pacific coast of South America. These penguins can grow upto 26-28 inches in size while they weigh around 11 lbs.

Commonly found in the regions of the Antarctic, Chile, and Argentina Falklands Islands, Chinstrap penguins are known as Pygoscelis antarcticus. They can be told apart from other penguins by looking at the black band under their heads, which gives the impression as if they are wearing a helmet. They are 27-28 inches long and their weight is 14 lbs.

They are also labeled as “The stone cracker penguin” due to their aggressive nature.

IUCN has listed them as “Least Concern” in their red list.

As the name suggests, this specie of penguin is native to Africa and cannot be found elsewhere in the world. They can grow upto 26.5- 27 inches and are also known as Spheniscus demerus. A braying sound made by them, sounding just like a donkey, named them “Jackass penguins”. Their chest and belly area is covered with small black spots.

The scientific community calls them Eudyptes pachyrhynchus, also known as Fiordland penguins, commonly. These penguins can grow upto 24-28 inches while weighing 5- 13 lbs. Their bodies have grey upperparts and white under parts. Their remarkable feature is the yellow eyebrow stripe, which runs from the eye toward the neck. They are endemic to New Zealand and Solander Island.

The emperor penguin tops the list of the largest penguins in the world followed by the king penguin, gentoo penguin, royal penguin, and others. All these penguins do share similar physical features, they even do similar funny walks, but the species mentioned in the above list surely differ from each other in terms of size.