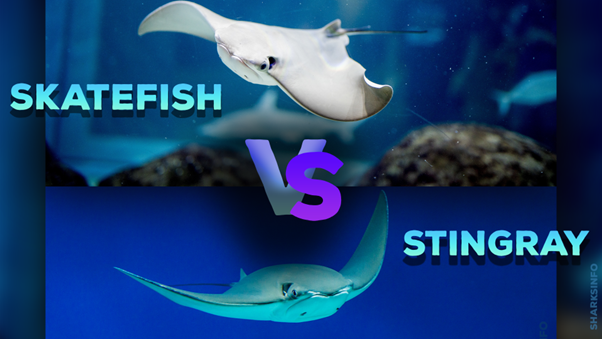 Among a variety of cartilaginous fish present in the ocean, skatefish, and stingrays are usually confused with eachother. At first, they both look quite similar with their flat bodies, swimming in the ocean. But if you look closely, both fish are quite different from eachother based on a number of anatomical and behavioral differences. Let’s have a look at those distinctive features of both.

But first, let’s get to know what skatefish and stingrays are.

With more than 150 species discovered till now, skatefish are cartilaginous fish that have flat bodies and short tails. Their bodies are covered with placoid scales. They are found swimming in deep oceans in cool water. Interestingly, skates reproduce their young ones in an egg case commonly known as a mermaid purse.

What Is A Stingray?

Relatives of sharks- stingrays can be found swimming in warm waters. They are also cartilaginous fish and in their bodies, the ventral side possesses their mouth. Just behind their eyes, they have those tiny spiracles necessary for breathing.

Difference Between A Skate And A Stingray

Read the below-mentioned differences between the two and you’ll be able to tell them apart.

Are There Any Similarities Between The Two?

Yes. Despite the differences, the skatefish and stingray do share some similarities. Both fish give similar appearances at a first glance as they both are elasmobranchs (cartilaginous fish). Both have flat bodies with their mouths and gills placed on the underside of the body. They are bottom-dwellers and are excellent at camouflaging to evade predators.

It’s tricky to tell apart the skatefish and stingray but looking closely at their size, habitat, color, teeth, fins, and tail can tell a great deal about them. So, next time you see a flat triangular or diamond-shaped creature in the depths of the ocean, you’ll be able to identify based on the above-mentioned differences.