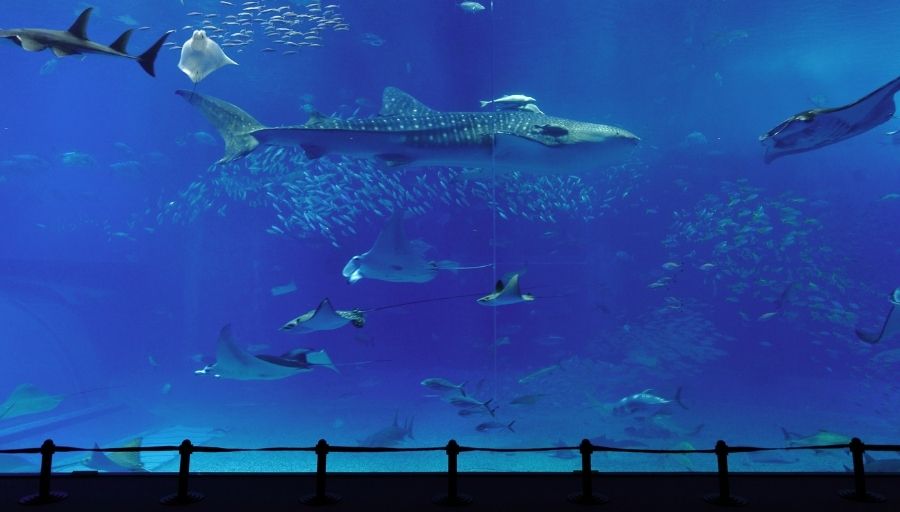 It is not only the sea that is home to this incredible and fascinating species of the ocean, the sharks, but there are a large number of them found in public aquariums as well. The size, aggressive behavior, and big mouths of sharks, along with their pointed serrated teeth, have long been considered the epitome of fear and danger for humans.

Until recently, shark behavior and habitat were poorly understood, and keeping them in captivity was regarded as near to impossible. Today, there are many public aquariums that house sharks of different kinds. If you aren’t sure where to look, this article brings you the most famous and responsible shark aquariums in the world.

Before we move on to that, know that sharks have been here for millions of years, and since then, they have diversified into over 500 species, and each one of them exhibits different behavior. With ranges in size from as large as 60 feet to as small as a few inches only, keeping sharks in captivity is not the same as keeping any other aquatic creatures. But sharks require large-size aquariums, suitable water chemistry, and a compatible environment.

Let’s now proceed and get to know the most famous and responsible shark aquariums in the world.

What are the best shark aquariums in the world?

A close encounter with sharks in their natural habitat has been one of the fascinating experiences one can have. However, not everyone has experienced sharks because of their fear, and they head to public aquariums. No doubt, such shark aquariums provide people the opportunity to get to know about the species in a better manner. If you were planning to visit one, check out the list below and see which one is nearer to you.

If you want to feel what exactly it’s like to be underwater, Georgia Aquarium is the place. You will be roaming around, seeing sharks as close as you are in real water. It is one of the favorite visiting places for shark enthusiasts who are looking to learn about species in detail.

Get hands-on with exhibits, experiences, and wonders you’ve never seen before. Inhabiting various species of sharks, you can check on their website about what’s happening today, the programs, and related visitor information.

Do you know that whale sharks are the largest species alive today? Is there a public aquarium where you can see this giant shark? Yes, there is the Okinawa Churaumi Aquarium in Japan.

Not only that, but this aquarium provides the opportunity to explore the rich variety of aquatic life. Considered among the best aquariums in the world, the aquarium features a sea turtle pool, dolphin lagoon, esplanade, kid’s adventure land, and other wide arrays of attractions. You can enquire about the program being run on the facility and can check the timing on their website.

In addition to having numerous exhibits and species, the National Aquarium is certainly worth a visit by itself.

In Shark Alley, you’ll come face-to-face with several species of sharks and discover that they are more admirable than to be feared. Besides, you can enjoy a shark behind the scene tour and shark 4D experience.

Do visit, and you’ll know why it is on the list of the most famous and responsible shark aquariums in the world.

Dubai has been among the most visited places in recent years, and all for good reasons. Among hundreds of attractions, Dubai also has an Aquarium & Underwater Zoo featuring a variety of shark species, rays, and other aquatic life.

At Dubai Aquarium, guests can experience a shark trainer encounter as well as learn about shark species and how they are cared for. Additionally, visitors have the chance to assist the aquarium staff during the training of Bamboo Sharks and Leopard Sharks.

Swim alongside Sand Tiger Sharks, Nurse Sharks, and many other shark species while snorkeling and diving, or walk with sharks and experience the thrill of shark swimming. Overall, the amusement of seeing sharks so close will keep you engaged for hours and hours.

The largest collection of sharks in the Northeast, the Adventure Aquarium is among the top and most famous aquariums in the world. Here the popular attractions are Shark Bridge, Shark Tunnel, and Touch a Shark.

The aquarium is spread over a large area, and it will take over 3 hours to go through all facilities. As the name suggests, you will truly be able to experience adventurous activities, including swimming with sharks. People who have visited say they have a shark-tastic experience. So check out the schedule and plan your visit accordingly.

An immersive experience in the deep blue sea awaits visitors at this enormous aquarium in North West England. Visitors can explore enormous tanks, pools, and tunnels that allow them to experience an immersive experience, as well as attend exhibitions, talks, and demonstrations. You can even swim with sharks and push your sense of adventure! Here are the instructions to go shark diving at the aquarium.

With sharks being such an incredible species of animal, ecotourism has seen a boom in recent years. Though they are found in all major world oceans, you can now experience the thrill and adventure at different public aquariums. It is certainly not easy to keep sharks in captivity, but the most famous and responsible shark aquariums in the world listed above are doing their best to keep the sharks happy and healthy. Visit the nearest one today and see for yourself what it is like to see sharks so close.