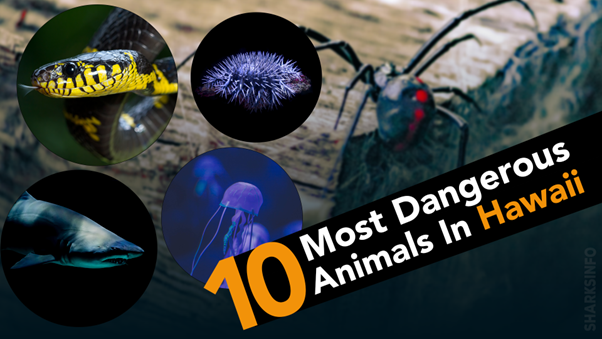 Hawaii attracts a large number of tourists every year because of its beautiful islands and blue waters. But with the natural beauty, comes natural habitat for certain wild animals, of which some are dangerous to humans. Here is the list of the top 10 animals that you should be aware of while enjoying your vacation in Hawaii.

The Top 10 Most Dangerous Animals In Hawaii

Box jellyfish are known to be the most dangerous jellyfish and it is also one of the poisonous animals found in Hawaiian waters. There are two species of box jellyfish; Carybdea alata and Carybdea rastonii whichare frequently encountered in Hawaii. Their transparent and small bodies give them the advantage of attacking humans unannounced.

The sting of box jellyfish, especially of Carybdea rastonii is nasty and causes severe pain, muscle cramps, nausea, dizziness, vomiting, and in some cases triggering cardiac arrest leading to the demise of a person.

The Hawaiian islands are home to centipedes and there are three common species of centipedes found there, but the Giant Centipede is the venomous one. It is also known as the Amazonian giant centipede and Peruvian giant yellow-leg centipede. The giant centipede resides in moist and shady areas.

The bodies of giant centipedes can be of various colors ranging from blue, green, orange, brown, and yellow. The black bands on their bodies and yellow legs and antenna give them distinct appearances.

The worst part about the bite centipede is that they cling to human skin, which makes it difficult to remove them and they cause a lot of damage meanwhile. Their sting causes excruciating pain which might last from a few hours to a few weeks. But the good part is that in most cases people easily recover from their sting and only a few people might experience allergic reactions to it.

Commonly known as Wana, the long-spined venomous sea urchin is one of the venomous species found in Hawaiian waters. They are echinoderms having black long movable spines on their bodies, which they use for defense purposes.

The venom of long-spined sea urchins is mildly poisonous and upon stinging humans, causes intense pain, and inflammation, and if remains for long in the body, can cause localized edema. In some cases, it has been reported that their sting can result in anaphylactic shock.

Hawaiian waters are known for the infestation of sharks and one of the most dangerous and common predators in Hawaiian islands is the Tiger shark. Maui in Hawaii has the highest number of tiger sharks and the number of attacks as well.

Tiger sharks are broad and flat-headed, having short snouts and slender bodies. Their bodies are dull-gray in color and their mouths are filled with sharp teeth. These sharks are known for eating everything that comes in handy to them, thus, human attacks are common while tiger sharks are in close vicinity.

Though tiger sharks’ attacks are serious, fortunately, no one has died from them. However, these attacks do cause some serious damage to human bodies.

A detailed guide to shark species present in Hawaiian waters can be found here.

A native to Hawaii, the crown of thorns starfish are invertebrates that reside and feed on the corals. They are carnivores and their name comes from the poisonous spines present on their bodies. Their bodies are reddish-gray or purple in color.

The crown-of-thorns starfish’s spines are full of neurotoxins, called saponins. When a human comes in contact with these spines, the saponin released causes sharp pain, stinging sensation, swelling, bleeding, nausea, and even infection. It is best to avoid touching them.

Though not deadly, research has shown that crown-of-thorns starfish’s sting can cause long-lasting damage, which might be irreversible, and even death in some severe cases.

Moray eels are one such organism that pose threat to humans both when alive and when dead. They are found in the Hawaiian reefs and are known for their predatory nature. They have large and powerful teeth and jaws, which they use to hold their prey.

Though moray eels are not aggressive, they do bite humans when they feel threatened or due to mistaken identity. There was a case of moray eel’s bite back in 2018. Their bite is not poisonous but can cause infection or severe injury which might result in losing any body part.

When consumed as food, Moray eels cause Ciguatera poisoning as they contain ciguatoxins.

Cone snails are one of the well-known and commonly present snails present in Hawaiian waters. They have often been observed, washed up on the shores, where visitors collect them due to their beautiful coloration and unique designs.

Though they are beautiful to look at, these small cone snails pose a serious threat to humans. People swimming in the Hawaiian waters shall always look out for them. The snails hidden inside their shells, when coming in contact with humans feel threatened and attacked as a reaction.

The toxin released by cone snails, even a few microliters, can kill upto 10 people. And according to studies, the venom of one cone snail is potentially enough to kill 700 people, which is huge. The symptoms of a cone snail’s sting include dizziness, blurred vision, paralysis, and respiratory paralysis, which eventually leads to death.

The yellow-bellied sea snakes belong to the subfamily Hydrphiinae and are highly venomous, common to Hawaiian waters. These snakes have elongated heads which are quite distinct from their bodies. The upper half of the body is dark blue or black in color. While the lower half is yellow in color, thus the name yellow-bellied snake. The tail of these snakes is also yellow but filled with black bars or dark spots.

The yellow-bellied sea snakes are filled with neurotoxic venom which they transfer into human bodies during biting. These toxins can cause paralysis, serious damage to skeletal muscles, stiffness, drowsiness, vomiting, and even acute kidney failure.

One of the venomous specie of spider found in Hawaii is the Black widow spider. They are easy to identify as they have quite distinct black and red coloring. You can commonly observe these spiders on the west side of the Oahu or Ewa Plain areas, which are comparatively hotter than the other areas.

The female black widow spider kills its male counterpart right after mating, as it possesses toxic venom full of latrotoxin. These spiders in Hawaii, bite humans when agitated or disturbed and their bite can cause symptoms in humans like severe muscle pain, nausea, cramps, muscle rigidity, increased heart rate, and high blood pressure. Though their bite is not deadly, there was a death reported due to their bite in 1983.

One of the most notorious human predators, responsible for the most human attacks- the great white shark, can be spotted in Hawaiian waters sometimes. They are easy to identify but their occasional presence in Hawaii makes the chances of their attack quite less.

If a great white shark attacks a human, they can lose their lives in the process or can surely lose a body part to these monsters.

The most dangerous animals in hawaii are box jellyfish, giant centipedes, tiger sharks, great white sharks, cone snails, and black-widow spiders. The venom of these dangerous animals can be fatal for humans, thus, it is advisable to keep a safe distance from these animals in Hawaii.