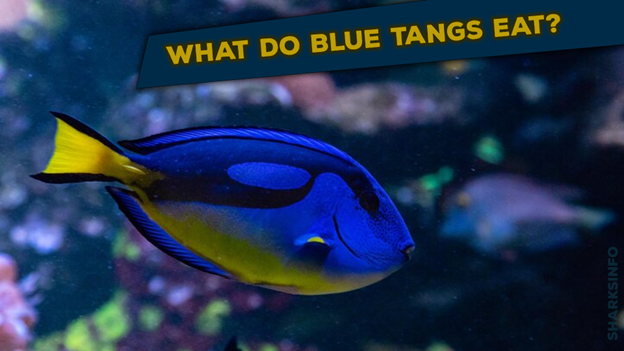 Indo-Pacific reefs are home to a type of fish known as the Blue Tang. They are popular fish for aquariums because of their bright blue coloration. To keep blue tangs in your home aquarium, however, you need to understand their habitat and, most importantly, what they eat.

While we may be familiar with the kind of diet we need to supply to the common species of fish, only a few have an understanding of the blue tang’s diet. Nevertheless, you should not let it stop you from bringing blue tangs inside and giving your home a pleasant look with their deep blue coloring. For that, the article brings a comprehensive guide of what you can offer to blue tang in their menu.

What does a blue tang eat?

Blue Tangs are omnivorous fish, meaning they will eat both plant and animal matter. Their selection of food comprises mostly algae, but they also consume small invertebrates, such as zooplankton and crustaceans, to obtain essential nutrients. To stay healthy, blue tangs need a diet that includes plenty of green and purple algae. A blue tang’s diet can also include sea grasses, corals, and other plant life.

A blue tang usually feeds in groups of more than 100 individuals, which provides it with protection from predators. However, they may also be seen eating alone.

What do blue tangs eat in captivity?

Algae, small invertebrates, and zooplankton make up their diet in the wild. With that said, it is essential to provide Blue Tangs with a variety of foods when keeping them in captivity. This can be accomplished by offering a mix of marine pellet food, frozen foods such as Mysis shrimp or krill, and live foods such as brine shrimp. Bits of seaweed can also be added along with other tiny microorganisms.

As Blue Tangs grow, their dietary needs will change. Juvenile fish should be offered more frequent meals consisting of smaller portions, while adults can be fed less often with larger portions.

There is no threat of extinction of Blue Tangs anywhere in the world, but the destruction of coral reefs is a real concern. The Blue Tang species will be displaced from their habitats and will be deprived of their primary source of food if coral reefs continue to deteriorate.

The bright blue coloration of blue tangs is one reason why they are popular fish for aquariums. The majority of their food comes from algae on reefs in the Indo-Pacific region.  In addition to their diet of algae, blue tangs will occasionally eat small invertebrates or zooplankton as a means of obtaining vital nutrients. They play a significant role in reef ecologies by grazing on algae and keeping the coral clean. Unfortunately, they are often collected for the aquarium trade, which can put stress on wild populations.