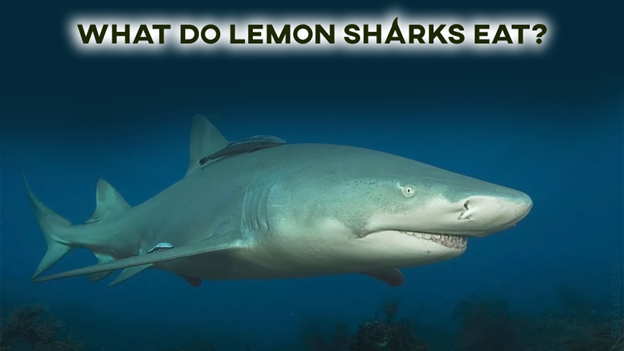 A well-known species of shark that are often featured in movies and documentaries, the perception of lemon sharks is made as giant monsters tearing apart human flesh and eating them. Though it may have a size of around 10 feet and needs plenty of food to fill up its stomach, humans do not make up in the list of their food menu. Rather, lemon sharks have a variety of food options in the marine habitat to choose from.

The fascinating creatures of the ocean, and their impressive sight allows them to hunt using false displays and specialized hunting techniques. As a result of the yellow tint of their skin, they blend in well with the ocean floor. Electroreception is also used by lemon sharks for navigation and hunting of their target.

Getting to know about these incredible features of the lemon shark, you will definitely be looking to know what they eat. Let’s discover it now.

The diet of lemon sharks

It is not uncommon for lemon sharks to consume a wide range of different foods. A majority of its food consists of bony fish and crustaceans, as it swims over muddy bottoms. Other than that, the diet also includes stingrays, mullets, bony fish, catfish, rays, crabs, and other invertebrates. Smaller and weaker sharks (the same species or different ones) are also part of the diet it consumes.

The nurse shark is more likely to catch prey that obliges less exertion to catch. It is, therefore nurse sharks mostly lurk around fish nurseries, so you can usually find them there.

With lemon sharks being able to be kept captive, there are a variety of food options for you to supply them with, including guitarfish, crustaceans, squid, croakers, and also birds. When keeping lemon sharks in captivity, make sure they are kept away from other species not meant as prey.

The surrounding environment plays an important role in determining what food options are available to the sharks. Therefore, we are going to see where the lemon sharks spend most of their lives.

The Lemon shark frequents shallow waters along the coasts and in reefs of the Subtropical and humid waters of the Atlantic and Pacific oceans. Often found in large groups, nurse shark uses their strong sense of sight, smell, and electroreceptors to find food.

An incredible and fascinating species of the ocean, because of their yellow skin color, lemon sharks blend in perfectly with sandy inshore areas where they often forage for food. A lemon shark’s flattened head, coupled with its short snout and acute senses, make it an adept predator. Lemon sharks eat a variety of food that, include fish of different types, crustaceans, squids, rays, crabs, and benthic organisms.