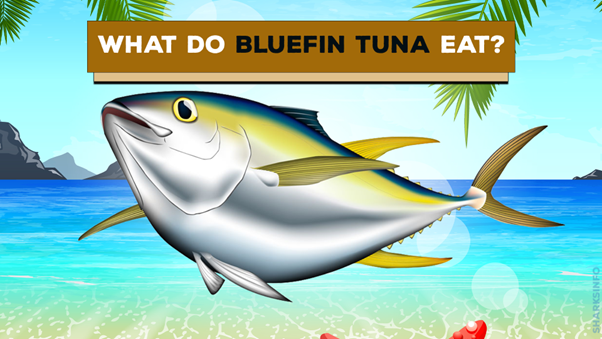 The largest tuna species ever recorded, the bluefin tuna surely looks royal with its dark blue body and white lower body. But with big size comes a big appetite, so how do you think bluefin tuna satisfy their hunger? Is there any special food they like to devour? Let’s explore the eating patterns of bluefin tuna.

Known by many names, bluefin tuna is divided into three species including Atlantic bluefin tuna, Pacific bluefin tuna, and Southern bluefin tuna. They have streamlined torpedo-shaped bodies which allow them to move swiftly in the oceans, that’s why they are known as one of the fastest sea animals.

As they are carnivorous specie, their voracious diet allows them to grow big in size. That’s why the largest bluefin tuna ever caught is as big as 13 feet and weighs around 2000 pounds. However, even being top hunters, they do not feed on humans nor try to attack them.

What Does Bluefin Tuna Eat?

Bluefin tuna is an opportunistic feeder, so whatever comes its way becomes its prey. But here are some of its favorite foods which it likes to take on as a meal.

Being a carnivorous fish, bluefin tuna has a large appetite which pushes them to eat a lot. That’s why they prefer small fish which they can easily swallow or can tear down from their teeth like mackerel, bluefish, sardines, and herrings.

The young ones of bluefin tuna like to devour zooplankton, but the adults usually filter zooplankton as they are not sufficient to satisfy their hunger.

According to the food traces found in the stomach of bluefin tuna, it has been observed that squids make up 80% of their diet. They prefer to hunt squids at night as they can find them close to the surface.

To obtain nutrients and energy in a sufficient amount, bluefin tuna feed on crustaceans like shrimps, crabs, mollusks, and others.

Among many other predators, bluefin tuna also feeds on sea birds. They like to devour sea birds to enjoy their protein content and other healthy nutrients.

Though bluefin tuna cannot consume big-sized turtles, they can surely tear apart small turtles and feed on them. Turtles are an easy catch for bluefin tuna as they move really slowly and can easily be caught for a meal. Some evidence also reveals that they consume turtles in order to remove certain parasites from their bodies.

It is not a common phenomenon, but there are some reports of big bluefin tuna feeding on the small ones.

How Does Bluefin Tuna Hunt Its Prey?

They are famous for their bursting speed and sharpest vision which they use for hunting their prey as well. They usually prey on the school of fish where they can consume a variety of fish in one go. Once they locate their prey, they burst to swim to capture their prey and their skeletal muscles help them to do so by allowing large contractions.

Bluefin tuna is the largest tuna that feed on a large amount of food including small fish, crustaceans, squids, zooplankton, and seabirds. At the juvenile stage, they prefer to consume kelps and plankton, but as soon as they grow into adults their appetite increases and so does the size of their prey.