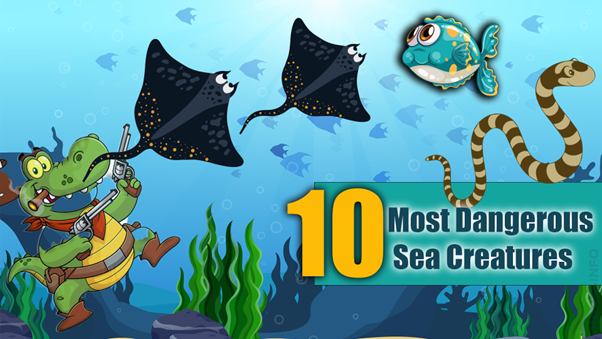 Alongside eye-catching and harmless creatures, there are several creatures in the sea that pose a serious threat to humans and can be really dangerous to swim with. So, before you plan to swim in the seas, you must be aware of potential threats there. Here, we are going to let you in on the list of the top 10 most dangerous sea creatures that you may encounter during your swim. Let’s see.

The 10 Most Dangerous Sea Creatures

Some of the following sea creatures are dangerous enough to cause even a person’s death. So be aware.

Calling them a killing beauty won’t be wrong, as their blue-ringed body looks pleasant to the eyes but they are one of the deadliest sea creatures. They are quite small in size but their venomous bites can kill a person within minutes. As per some reports, it is claimed that their venom is 10,000 times more poisonous than cyanide.

If you get bitten, you won’t feel pain but will start feeling difficulty breathing after a few minutes leading to paralysis. The tetrodotoxin released from their salivary glands while biting attacks the diaphragm of a person, affecting the ability to breathe.

They are usually found roaming in the coral reefs and shallow tide pools of the Pacific Ocean.

Found in warm coastal waters of the Indian and Pacific oceans, sea snakes are as much poisonous as land snakes are. It has been observed that they are passive-aggressive in nature, as they are reluctant to bite. But some of their species when startled, prefer to bite to protect themselves. Like a blue-ringed octopus bite, a person doesn’t feel any symptoms immediately after a sea snake’s bite. But after some time, they start experiencing nausea, headache, and the paralysis of muscles.

The neurotoxin released with their bite results in kidney failure and cardiac attacks. If treated on time, the death could be prevented.

Though sharks are the most feared sea animal, not all sharks show a predatory attitude toward humans. Only great white sharks and tiger sharks are known to attack humans. The razor-shaped teeth of great white sharks are employed by them to tear apart humans either to satisfy their hunger or simply due to mistaken identification. They are responsible for most of the shark attacks against humans.

The tiger shark is a loner who prefers to attack at nighttime. The great white shark is commonly sighted in the coastal waters of almost all oceans while tiger sharks are common in Hawaii and deep waters.

Yes, those pretty jellyfish could be dangerous as well. The box jellyfish is known as the deadliest jellyfish in the world. It does not possess any sharp organ to tear apart its prey but its tentacles are filled with venom. They are hard to spot in the ocean due to their transparent appearance and small size, that’s why their bites are common in certain coastal areas of Australia, and South East Asia.

The nematocysts present on their tentacles after coming in contact with the human body cause excruciating pain, which often leads to a contracted state of heart, which results in death.

Also known as firefish and zebrafish, lionfish is a vibrant-colored venomous creature present in the sea world. They have beautifully crafted brown, white, or maroon bands on their bodies. They are found in the coastal areas of the Caribbean and Atlantic oceans. They are not aggressive animals but do attack if provoked. The spines on their bodies are filled with neuromuscular toxins.

Their sting that releases acetylcholine can last for days causing sweating, extreme pain, difficulty in breathing, and paralysis in some cases as well. That’s why it shall be treated immediately.

With remarkable camouflaging abilities, stonefish manage to hide between the rocks and are hard to spot. Found in the Indian and Pacific seas, stonefish are one of the most highly venomous fish living to date. Their dorsal fins have 13 spines which are sharp like needles. When a diver steps on them by mistake, their spines penetrate into their foot or limbs pushing venom into their body.

Their sting causes agonizing pain, nausea, fainting, swelling, and paralysis. Though they inject only a small amount of venom, it can cause heart failure.

With the ability to swallow humans instantly with their wide mouths, crocodiles are one of the most dangerous and wild creatures in the sea. The number of deaths reported due to crocodile attacks is very high. It has been noted that saltwater crocodiles are responsible for most of the attacks and prey on a person when least expected.

Their bite is 10 times stronger than great white sharks, thus even if you manage to survive their attack the bite can result in loss of limbs or other injuries.

Known for their unique protective style in which they blow their bodies to protect their spines outwards to evade predators. Thus they are also named blowfish. The toxins in their body can be responsible for the death of around 20-30 humans at a time. As it is widely consumed for food purposes, the tetrodotoxin present in their liver shall be removed and washed carefully.

If not cooked or washed properly, it can cause numbness, vomiting, loss of consciousness, and eventually respiratory failure.

Having extremely sharp and venomous spines, they also make it to the list of the top most dangerous sea creatures in the world. It is known to be able to inject venom from its short and blunt flower-like spines. They are found residing the seagrass, coral reefs, and sandy areas in the seas. Their pleasant appearance may appeal to people to touch them which agonizes them and they deliver venom into the person’s body.

The interesting fact is that its venom does not kill a person, but the after-effects of that venom cause disorientation in a person leading to drowning in the ocean.

With its deadliest sting, the stingray staying loyal to its name can sting humans which can even cause the death of the person. They do not show predatory behavior toward humans, but if they may be stepped on, they will surely sting. That happened with the infamous Steve Irwin in 2006, who was stung in the chest by a stingray barb, causing him a painful death.

They are flat-bodied sea animals found usually hidden under the sand at the bottom of the oceans. So be cautious while swimming in the deep tropical or temperate waters.

Blue-ringed octopuses, box jellyfish, tiger sharks, stingrays, stonefish, sea snakes, and pufferfish are some of the most dangerous sea creatures in the world. The toxins released from their bodies can cause painful symptoms which could eventually lead to death. So be very careful while swimming in the oceans and especially watch out for the sea creatures mentioned above.