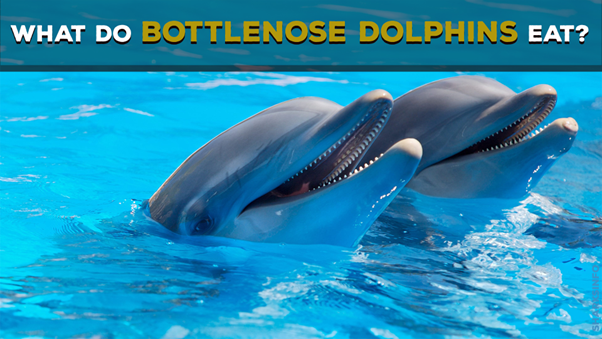 Though there are plenty of dolphin species in the ocean, every dolphin somewhat differs from the others either based on anatomy or behaviors like feeding behavior. The bottlenose dolphin is one of the most spotted dolphins in the coastal waters, thus it is natural to wonder what a bottlenose dolphin eats. Let’s have a look.

What Are Bottlenose Dolphins?

Tursiops truncatus-Common bottlenose dolphin is a resident of tropical and temperate oceans and belongs to the family of mammals, Delphinidae. They are grey in color, have streamlined, sleek, and fusiform bodies, and have a short snout that has evolved into a blowhole, located right above their heads.

Size and Weight of Bottlenose Dolphins

It has been observed that males of bottlenose dolphins are bigger than females both in height and weight. On average, they can grow upto 6-13 feet while weighing 330-450 lbs. However, the largest specimen recorded till now is 13.5 feet in length and weighs 1400 lbs.

What Do Bottlenose Dolphins Eat?

Bottlenose dolphins are carnivores and feed on a variety of foods. The interesting part is as they are quite social animals, their feeding habit largely depends on their location and environment. In wild, they might crave something else than in captivity. Let’s take a good look at their food choices.

1: Diet Of Bottlenose Dolphins In Wild

Due to their predatory nature, bottlenose dolphins roam in the oceans and prey on a variety of fish, squids, eels, and crustaceans including crayfish, krill, lobsters, and shrimps. In wild, their food choices majorly depend on the geographic location and the food available there. If they couldn’t find anything around, they also feed on plankton which is easily available around to satisfy their hunger.

2: Diet Of Bottlenose Dolphins In Captivity

The food choices become limited in captivity to ensure the safe survival of these dolphins. They are served with frozen fish, instead of fresh fish. They are also provided with squids, shrimps, squids, and numerous species of fish so they get adapted to captivity easily.

So many food choices, but do you know how these dolphins eat?

Bottlenose dolphins do not use their teeth to feed on their prey. Instead, they locate their prey and use their teeth only to grip the prey. Once they are ready, they swallow the prey as a whole as their stomach is highly compartmentalized, it quickly takes up the prey and starts digesting it.

How Do Bottlenose Dolphins Hunt For Food?

Bottlenose dolphins are intelligent species having brains even larger than humans. That’s why it can be predicted that they might hunt their prey in a very planned manner. That’s true, they use echolocation to locate their prey in the ocean and use a number of hunting strategies to fill their tummies.

A group of dolphins encircles a school of fish, located by echolocation, and then take turns to feed on them one by one.

Some diver bottlenose dolphins smack the surface of the water where the school of fish is present, forcing them to stay in a circle. While other dolphins make sure that no fish can escape by blocking their way and they enjoy the feast.

Some of the bottlenose dolphins use their sonar pulses to find the fish hiding under the sand and then bring them out by digging a crater.

The fish which are usually way too large for a dolphin’s mouth gets smacked by dolphins against any hard reefs in the ocean which breaks the fish into pieces that can easily be consumed.

The bottlenose dolphin eats squids, crustaceans, large and small fish, and sometimes plankton by employing multiple hunting strategies for its growth and survival. It does not bother its teeth to chew the prey but swallows it whole. However, its feeding habits vary according to geographical location and living conditions.