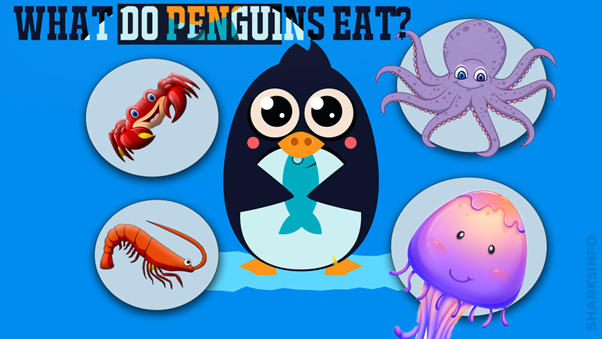 Penguins are white and black colored fluffy, aquatic creatures that live in Southern Hemisphere, however, some members are also native to Ecuador whereas around about 18 species have been living in the colder region of Antarctica. They can regulate their body temperature which is why they can survive in extremely cold conditions. Penguins are characterized under the category of birds but they do not fly because they have flippers instead of wings and sharp claws which allow them to walk on the ice. But what about their feeding habitat, what do they eat? Scroll down to find the answer.

What Do Penguins Eat?

Penguins are carnivorous species that feed on a variety of food, they are opportunistic feeders that adapt their diet according to their habitat. Some of the main dietary items of the penguins are listed below:

All type of penguins feeds on small crustaceans, as they can easily find them from the water surface and swallow them completely without chewing. They also feed on some large crustaceans such as young crabs, shrimps, and lobsters.

Cephalopods are the part of penguin’s diet such as cuttlefish, squids, and octopuses. Giant watery squids, Glacial squids are the most common type of cephalopod included in the diet of penguins. Moreover, a variety of octopuses are consumed by many species of penguins as well.

Depending upon the type of penguin, the fishes are the main dietary item as the diet of Emperor penguins is 90 % based on the fishes whereas the diet of Chinstrap penguins consists of only 10 % of fishes. In general, penguins feed on a variety of fishes such as sardines, sprats, mullets, opal fish, silverfish, cod, pilchards, anchovies, and lantern fish.

Though jellyfish are not a favorite food of the penguins some of them are very good at catching the jellyfish and feeding on them. The penguins generally hunt jellyfish when they do not have anything to eat.

This is quite unbelievable but some studies show that penguins swallow small stones and pebbles purposely. It is observed that they do so to reduce hunger when they face a shortage of food.

How Do Penguins Hunt Their Prey?

Penguins have adapted unique hunting tactics to hunt their prey. When they are in the mood to hunt the prey, they go underwater, wait for about 20 minutes at the depth of 15 to 18 feet to pursue, grasp, and swallow the prey, and come out of the water. They have strong jaws and spiny tongues which provide them with a powerful grip on prey while hunting.

How Much A Penguin Does Eats?

Well, the amount of food a penguin consumes depends upon its size and season. During the breeding season, they usually go through a period of fasting and depend upon their body fats for survival. On average, the penguin can eat about 2 pounds of food per day.

The penguins are the most fascinating sea bird that has gained people’s attention because of their black and white coloration. They are mostly inhabited by the colder regions of the world where they have to face a shortage of food which is why they feed on a variety of foodstuffs such as krill, crustaceans, small fishes, jellyfish, squids, lobsters, and octopuses. They go through a period of fasting and rely on their body fat during the entire breeding season.