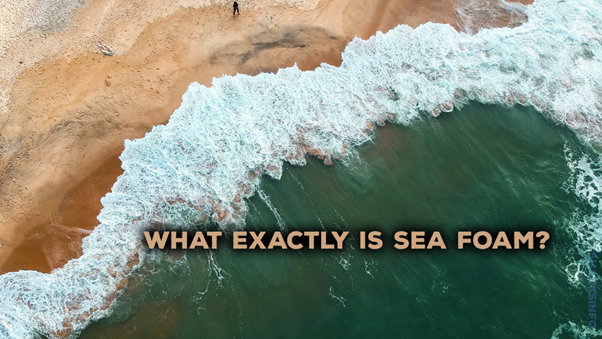 You must be impressed by seeing the ocean’s clear water without any impurities. Right! The reality is that it’s not as clears as it looks. Seawater contains many dissolved substances. When strong winds and storms roll on the oceans, they form Sea Foams. You must be curious to know the mystery behind the formation of Sea form. Scroll down for more information.

What Exactly Is Sea Foam?

Along the rocky shores, sandy beaches, and reef areas, the breaking waves hit the ground, forming a bubbly, thick foam on the surface of the oceans. Seafoam is a leathery green or frothy material that when dissolved in seawater, forms a white bubble.

What Does Sea Foam Contain?

Seafoam is a mixture of different compounds and air bubbles which when dissolved in water form foam on the surface of the water. These compounds include organic matter like phytoplankton are split up into small pieces by the activity of UV rays. These substances along with atmospheric carbon dioxide and methane from sea foam.

What Is The Colour Of Sea Foam?

Is Sea Foam Toxic To Humans?

No, sea foam is not very toxic to humans as it indicates a productive ecosystem. When due to ultraviolet radiations, the algal blooms deteriorate, it greatly affects aquatic life which indirectly affects human health. The toxin released from algal blooms is airborne which causes itching of the eyes as well as other respiratory disorders such as asthma.

Is There Any Use Of Sea Foam?

Regardless of their harmful effect, sea foam is useful to humans in many ways such as:

After the tidal waves settle down, many organic compounds such as leaves, bark, and algal blooms dissolve in the water along with the bubbles of atmospheric carbon and methane, forming a sea foam on the surface of ocean water. Depending upon the type of compounds, the sea foam is white, green, and brown. Though, it doesn’t pose much harm to human life because the formation of sea foam indicates a productive ecosystem. But the sea foam formed by the decomposition of algal bloom is quite harmful to humans as well as to marine life