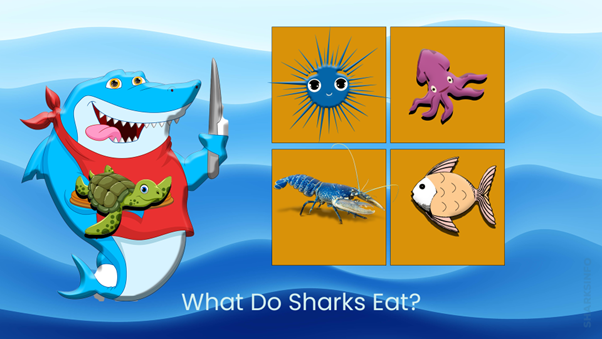 We all have seen many movies about sharks and we have discerned that all of them are bloodthirsty for almost any living organisms related to flesh- meat. Though on television sharks are seen to be always hunting humans and as soon as they find a drop of blood- they go wild and eat up all the characters in the movie except the protagonist; in the end, the protagonist alone kills all the sharks. But, reality indeed is quite the opposite; let’s discover the truth…

There are multiple living organisms that sharks have eyes on to consume- including humans too. But the ratio that is shown in films is a little too much.

Almost all sharks are carnivorous but, the most famous are great white sharks, blue sharks, tiger sharks, and hammerhead sharks. As meat-eating sharks, they enjoy hunting for their food so they consume various animals and the food they enjoy is;

As we see; we humans are not even on the list- no need to feel left out or excluded, pun intended. Nevertheless, if people feel like taking risks and by choice want to swim in the water with lots of sharks in it then don’t feel shocked if they attack you because the sharks have sharp senses and even a minute drop of blood gives them a signal that their prey is in their reach.

Small-sized sharks eat small fishes and small-sized squids and those sharks who are larger hunt on dolphins, big squids, and even large-sized fishes too.

Phytoplanktons are basically plants that are minute- not visible to the eye as they are microscopic. This kind of plankton involves:

Most sharks are carnivorous and can eat humans too and some even are planktivorous that does not give humans a green card to be close to such sharks because even though the attacks are rare, they do exist. One can never trust animals as they are not compassionate like humans.