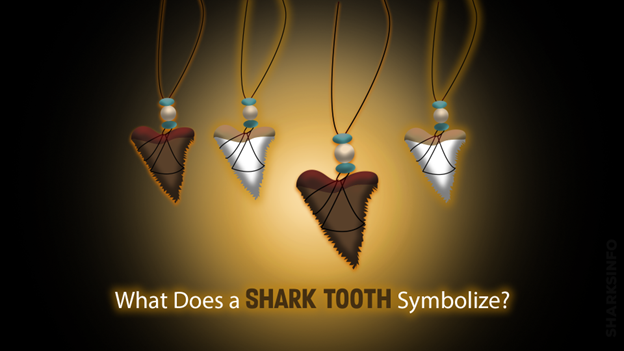 Hunting shark teeth is not simply done for monetary gain (although some shark teeth are worth hundreds of dollars) or merely for fossil collecting, but it has a much deeper meaning in some cultures than we might think.

The myths and stories surrounding sharks have been handed down to us through the ages, with humans both admiring and fearing these monster creatures. Perhaps the most fascinating characteristic of sharks is their powerful jaws. There are approximately 50 to 300 teeth in a shark’s mouth at any given time. It is possible for them to have over 50,000 teeth in their lifespan.

The teeth of sharks serve as critical predatory equipment, but for humans, they represent something completely different. Wondering what it is all about? Let’s give it a read to the end, and you will know about it all.

Is there a symbolic meaning to a shark tooth?

Shark teeth are powerful symbols that have been used all through the past by various cultures. They are believed to bring protection and good luck, as well as spiritual properties that can be used in shamanic rituals. In some cases, the possession of a shark tooth is considered a sign of status and wealth.

Spiritual meaning of a shark tooth

Shark teeth have been used as amulets and talismans to protect against evil spirits and bad luck for centuries. In some cultures, shark teeth are seen as symbols of strength and power, while others believe that the sharpness of the teeth can ward off negative energy.

For example, white shark teeth are believed to bring prosperity and good fortune, while black shark teeth are thought to ward off evil spirits or bad luck. Some people even believe that wearing shark teeth can help to improve one’s physical strength!

Shark teeth have historically been worn as jewelry by sailors and surfers for superstitious reasons. The teeth symbolize strength, preventing shark attacks.

There is no scientific evidence to support the belief that wearing a shark tooth amulet will protect you from evil spirits or bad luck, but many people continue to wear them because they feel it gives them a sense of protection.

Is it lucky to have shark teeth?

The shark tooth symbol has been used for centuries as a protective charm worldwide. Sharks are seen as powerful and feared creatures, so the tooth is seen as a way to ward off bad luck and bring good fortune.

The shark tooth symbol is also seen as an emblem of strength and power. Some people believe that wearing a shark tooth can help them tap into their own primal instincts and strength. Others simply see the tooth as an interesting piece of jewelry.

Whatever your individual views, there is no negating the power and meaning behind the shark tooth symbol. Whether you view them as a protective charm or a sign of strength, these teeth have an undeniable power to them.

The belief that shark tooth wearers are adept at surviving extreme situations and masters of their own world are common among people who wear shark teeth. For them, it symbolizes strength, power, and integrity and also holds spiritual importance. You can gain special healing properties from shark tooth jewelry along with protecting you from shark attacks and taming your physical strength. These beliefs may be true in some cultures, but they may just be assumptions in others.