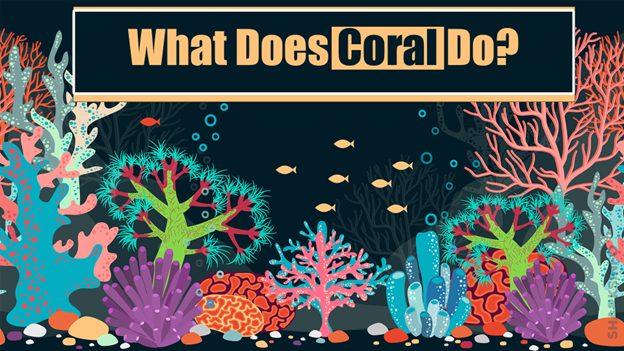 Do you know the fact that around 25 percent of the marine world’s fish depend on coral reefs for food and habitat? Yes, you heard it right. However, coral does more than just that. To answer what coral does would take you to read this piece of information, and you will definitely know the answer by the end. So, here we start!

What exactly is coral?

This is a robust substance made up of tiny sea creatures called polyps whose skeletons make coral. Polyps are related to jellyfish and anemones, and they have a soft body that is surrounded by a hard, calcified exoskeleton. The exoskeleton is devised of calcium carbonate, which is the same element that creates chalk and limestone.

Although coral looks like a plant growing from seafloor roots, it is actually a marine animal. Coral species range from shallow, warm waters near coasts to deep, cold seafloors of the open ocean, with around six thousand species worldwide.

Coral reefs are formed when many corals live together in one place. As it turns out, coral reefs are among the most productive and assorted ecologies in the world. A multitude of aquatic species, including fish and invertebrates, depend on them for their habitat. Coral reefs also protect coastlines from waves and storms, and they are an important source of food and income for people who live near them.

Now that you know what coral is, let’s find out what they do.

What does coral do?

Throughout nature, corals play an important role in a variety of different processes and occurrences; some of the crucial roles are described below.

What are the threats to coral?

The coral reef ecosystem is in grave danger, unfortunately. There are natural threats, such as predators and storms, and there are human-caused threats, such as pollution. The major contributing factor includes:

There are hundreds of species of corals on the planet, making coral reefs something of a unique ecosystem. Their role in protecting lives and property, as well as supporting thousands of businesses, is critical to the health of our coasts and vibrant economies. Despite their importance, coral reefs are in danger from a range of extortions, including global warming, contamination, and overfishing. It is indispensable that we take steps to protect these vital ecosystems.