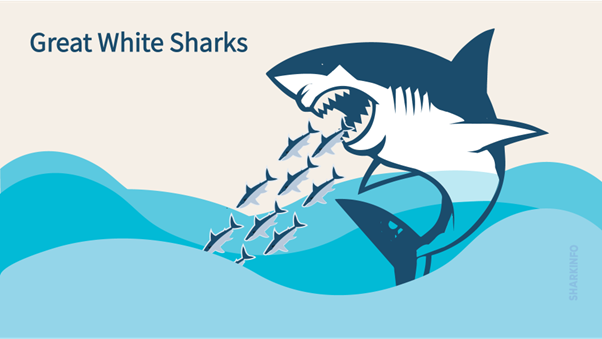 What Eats A Great White Shark?

Following hunters have a tendency to hunt the Great White Shark.

According to reported data, whales are known to be the predators of sharks. Among whales, Killer Whales are at the top of the list – Killer whales are also called Orcas – the top hunter without any predators. Orcas are the most powerful and the only natural killers of Great White sharks.

The killer whales are about 20 to 25 feet in length and weigh about 6,000 pounds. The whales always hunt in a group of 10 to 12. The whale first circles around the great white shark hit them hard on the oily liver, grabs them with its long pointed teeth, squeezes the wound, and knocks them down.

It is quite interesting that Great White sharks eat the members of their own families. These shark attack in a wild by grasping each other with their long serrated teeth and killing each other. However, the reason behind sharks fighting is the scarcity of food. It is observed that the large species of Great White sharks feed on smaller ones whereas the two big rivals fight with one another because of anger and take each other down.

Humans pose a great threat to sharks, on average they kill millions of sharks every year for commercial purposes. The fisherman uses long lines and a net to catch a White shark. The practice of overfishing is common in California and along the coast of Florida. Other than fishing, the most brutal way to kill sharks is finning – the process includes the cutting of sharks’ fins and throwing them back into the waters where they may die due to continuous bleeding and suffocation. The finning practice is common in China where fins are used to make soups and medicines.

An orca whale can grow up to 25 feet long and weigh as much as 10,000 pounds or more, making them bigger than its opponent, the great whites. Despite having fewer teeth than a great white, killer whales have teeth that are somewhat more resilient, measuring up to three inches in length. It helps them grab their prey and take them down.

Orcas approach great white sharks in groups and from all sides so that it gets no way to escape. Attacking from multiple directions, orcas hold the great whites and flip their bodies. When a shark is overturned, it goes into a condition identified as tonic immobility. It means that as soon as the great white body is flipped, it cannot move and become almost paralyzed.

Orcas keep the shark in this state for a few minutes and then target the shark’s liver. In sharks, the livers are large and contain a high amount of nutrients and calories. The liver is an integral part of their bodies, and taking it away will severely affect the shark, which will eventually lead to death.

That’s how the apex predators are targeted by killer whales.

Great White sharks are the top predatory animals of the oceanic world, but they have few predators as well. Among all, the Killer Whale or Orcas are the ones that kill and feeds on Great White sharks under the water. Other than that, the White sharks are known to feed off the baby White sharks when they are devoid of food. Further, human activities pose great threats to the population of sharks. Overfishing and finning are the two common practices that lead to the death of millions of sharks. To conserve these incredible creatures, these practices should be banned all over the world.