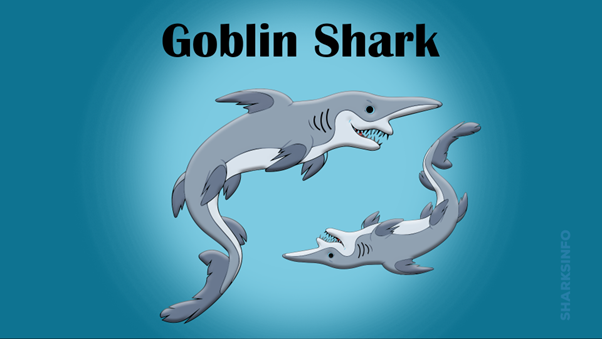 Not much is known about the incredible Goblin sharks but we are introducing this incredibly rare species of sharks to you. So scroll down and read on.

What Is The Scientific Classification Of Goblin Sharks?

What Is The Global Distribution Of Goblin Shark?

Goblin sharks usually live near the floor of the ocean, usually at the depth of 40 to 1,300 meters. They are slow swimmers, bottom dwellers species that prefer warm mid-water for surviving. They live along the seamounts and continental shelves. Further, they have been rarely spotted near the shoreline which is why they have never been filmed. However, some small specimens have been hardly spotted near the coastline.

What Are The Biologically Distinctive Features Of Goblin Shark?

Goblin sharks look quite distinct from the other species of sharks as their skin is pink in color. The pink coloration is because of the transparency of the skin – the blood vessels are visible. The unique feature of the Goblin shark is that its fins are greyish-bluish. The skin bears lateral denticles which protect from injuries.

Furthermore, they have soft and saggy bodies with long heads, elongated snouts, parabolic mouths, and small eyes. They have short pectoral fins, long caudal fins, rounded dorsal and pelvic fins, and 5 pairs of gills slits. They have 35 to 53 teeth in the upper jaw and about 31 to 62 teeth are embedded in the lower jaws.

What Is The Size Of Goblin Sharks?

Well, the exact size of the Goblin shark is not demonstrated but the studies conducted on these unique species of sharks suggested that the average length of Goblin sharks ranges from 9.8 to 13.1 feet or 300 to 400 cm. The male shark reaches the maturity level at the length of 9 to 13 feet or 264 to 384 cm whereas the length of the mature female is about 11 to 12 feet or 335 to 372 cm.

Further, it was reported that the largest specimen of the Goblin sharks recorded can measures about 18 to 20 feet or 540 to 617 cm in length whereas the smallest specimen collected can be 3.51 feet or 107 cm long.

What Is Menu DoGoblin Shark Prefers?

Goblin sharks are bottom dwellers which include the following items in their menu:

The reproductive behavior of Goblin sharks is not studied in detail as compared to other species of sharks because of their deep-sea habitat. However, it is believed that the sharks reproduce by ovoviviparous mode of reproduction. The sharks get matured at the age of 16 years and are estimated to live for 60 years.

Well, that’s all about the living habitat of Goblin sharks. For further understanding of them, we are sharing some fascinating facts about Goblin sharks. Let’s see if you already know these facts or not. Let’s go!

1:  Because of their scary pinkish look, the Goblin sharks are also named Vampire sharks.

2:  They have also been named Living Fossils as they are the only member of the family Mitsukurinidae that lives deep in the ocean water today.

3:  The size of the Goblin shark shrinks as it grows older.

5: Though they are deep sea species but are not restricted to one particular locality instead they have a wide range distribution over the globe.

7:  The nose of the shark is called the rostrum which helps the species in detecting the movement of the prey.

8:  Other than living beings, these sharks eat garbage, canes, and boat as well.,

9:  The shark is captured for commercial purposes only in Japan.

10:  The species are listed as Least Concern in the Redlist of IUCN.

Goblin sharks also known as living fossils are living in the open water for about 125 million years ago. All over the globe, the species are widely distributed but they only prefer to live deep in the ocean usually at the depth of 40 to 1200 meters. Though the species are considered Least Concern, it came in a limelight because of its unique pink-colored skin, elongated snout, parabolic mouth, and pointed nose. The sharks feed on a variety of food items and can grow to an average length of 9.8 to 13.1 feet or 300 to 400 cm. Incredibly, sharks reach the maturity level at the age of 16 years and can live for about 60 years. We have also shared some of the least known interesting facts about Goblin sharks for your interest.