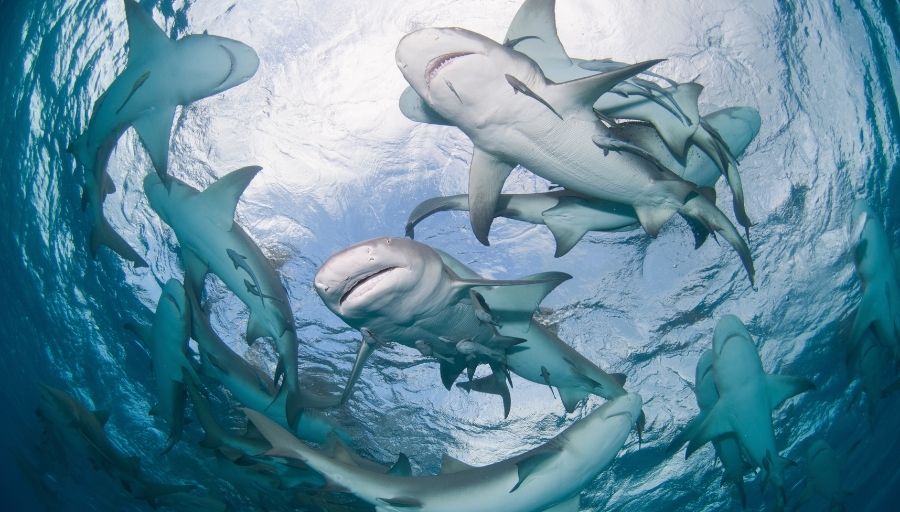 We think it points to exactly what happens when a person stumbles across a group of sharks while swimming. It could also be related to the fact that most sharks are cold-blooded.

What Is A Group Of Sharks Called?

A group of sharks is called a shiver, frenzy, herd, gam or school. That is what some call them.

There are a few other collective nouns for sharks, such as collage, pod, shoal or grind. School or pod is a general term used for other fish species such as dolphins and whales.

Sharks are a group of elasmobranch fish characterized by skeletons made up of cartilage, and what makes sharks so fearful are their teeth.

A highly intelligent and notorious being with an interesting social life. Like other marine animals, sharks group together for mating, hunting and migration. They live in pairs or in groups. Sharks are highly aggressive, but also highly social animals.

The Great White Shark is a species of shark that prefers to stick to smaller groups. Great Whites are known as a school or shoal of sharks. They tend to avoid fights because they know that a single bite from an opponent can permanently impede them. Even though they travel and hunt their prey together, they prefer to feast alone.

What Do You Call A Group Of Sharks?

This is the most common way to call a group of sharks. Imagine you’re on a dive and you’re stuck with too many sharks in every direction. Without a deliberate reaction, the body begins to tremble with fear. It begins to ‘shiver’. The reason a group of sharks is called a ‘shiver’ may be due to the fact that sharks are a cold-blooded animal.

2. A School Of Sharks

Sharks can be grouped in this way because they live in the ocean, and the term ‘school’ is commonly used to call a group of sharks, fish, dolphins and whales.

The term ‘A herd of sharks’ is not as commonly to call a group of sharks. This collective noun could be due to their size being similar to those of herd animals, such as a herd of cows or zebras. It is also believed that this term is used because of the natural social aspects and activities of sharks.

4. A Frenzy Of Sharks

A frenzy of sharks is also a correct term to use for a group of sharks. You may have heard the term ‘feeding frenzy’ when it comes to meal time for sharks. The word ‘frenzy’ is defined as ‘a state or period of uncontrolled excitement or wild behaviour’.

When sharks feed, it can be quite a dramatic and chaotic show, so the word perfectly describes it!

The term frenzy can also be used to describe a group of sharks when they are not eating. Another fun fact about a sharks eating habits is that they have been known to munch on their fellow sharks from time to time.

What Is A Group Of Baby Sharks Called?

A singular baby shark is called a ‘Puppy’! So a group of sharks is called ‘Puppies’. Although they share the same name, a puppy shark is not as cute and innocent as a fluffy puppy dog.

An interesting fact about sharks is that a mother shark does not stick around to care for her babies after they are born. Puppies live and grow alone.

Mother sharks often even attack their young. Puppies can survive independently because they are born with enough natural survival knowledge to hunt and they even have a full set of sharp teeth.

Although mother sharks make sure their young are delivered in safe places, they leave shortly after. When looking for places to see shark babies, your focus should be the coast, estuaries and seamounts. They prefer to live in shallow, warm waters where there is a lot of food.

What Is A Group Of Sharks Called? | & Other Cool Shark Facts

Did you find this article about ‘What Is A Group Of Sharks Called?’ interesting? Then here are a few more cool shark facts to add to your shark knowledge.

Sharks have very strong night vision: Don’t you know that most sharks have sharp night vision? They can even see colours. So be careful when diving at night because you may not be able to see them, but they can see you.

Sharks have a strong sense of smell: Sharks can smell human blood or wounded prey from miles away. Through the electroreceptor organs, they can detect magnetic fields and temperature changes.

They have thousands of teeth: Interestingly, sharks can go from having 3,000 to 35,000 teeth in their lifetime. Each species of this animal has a different number of teeth.

Sharks let out big farts in the sea!: The big kid in us let out a little giggle when we found this out. Sharks let out wind through their cloacas when they swallow too much surface air. This also provides food for little fish! (See the video below).

Sharks are one of the oldest animals in the world: Fossil studies show that sharks have been on this planet for millions of years, with more than 400 different shark species.