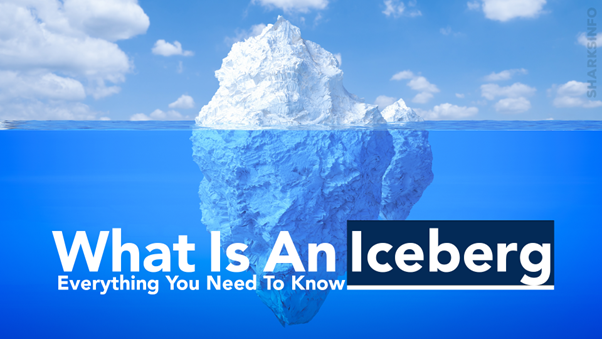 Have you ever seen a piece of freshwater ice floating on the surface of ocean water? Looks like a piece of a cloud in the stretched sky. That piece of ice is called Iceberg which forms when the glacier melts or breaks down into smaller chunks. Well, that was just a brief description – scroll down to learn more about icebergs.

What Exactly Is Iceberg?

What Is The Color Of the Iceberg?

What Are The Measurements Of the Iceberg?

What Are The Types Of Icebergs?

Depending upon the size parameters, the icebergs are of the following types:

1:  Bergy Bits: The Bergy Bits are the medium-sized or large broken-off parts of the ice that are usually measured a size above sea level ranging from 3 to 250 feet and have a surface area of around 1,076 to 3,229 square feet.

2:  Growlers: These are small-sized fragments of ice that have a surface area of 215 square feet above sea level and a size of 3 meters.

What Is The Shape Of the Iceberg?

The iceberg is characterized by its shape, it may be:s

1:  Tabular Iceberg: These icebergs are flat from the top and have steep sides.

2:  Non-Tabular Iceberg: These icebergs have different shapes such as:

Which Is The Largest Iceberg Ever Recorded?

Do Icebergs Pose Any Danger?

Well yes, icebergs pose danger to ships especially. The North Atlantic region is known for having sharp, pointed as well as hidden icebergs that are strong enough to tear the bottom of the ship completely. The most popular misfortune occurred in 1912, a large ship The Titanic collided with an iceberg leading to the death of around 1,500 people.

Icebergs are fragments, broken off from the glaciers, and float on the surface of the oceans. Typically, the icebergs are white but some may have green or blue coloration as well. The icebergs vary in size as well as in shape, however, these fragments are highly dangerous to the ships and damage them completely.