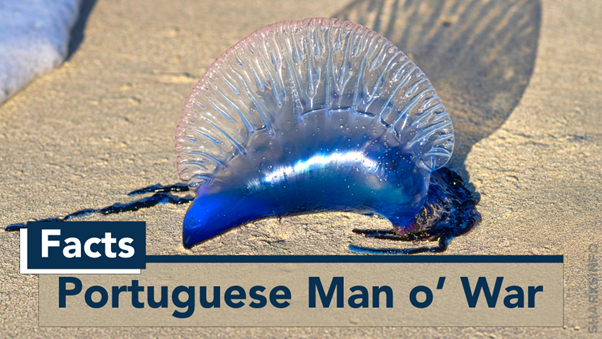 Here we have compiled some of the least known facts about the Portuguese man o’ war below:

1:  The Portuguese man o’ war has a wide range of distribution as it is found living in the biggest oceans of the world, as well as in the Northeastern United States, the Sargasso Seas, the Gulf of Mexico, and the Caribbean Sea.

2:  They are found in various color lie deep blue, purple, and pink mostly.

3:  Portuguese man o’ war is not a jellyfish it is a member of the siphonophore group – animals that show close resemblance with the jellyfish.

4:  Interestingly, it looks like the Portuguese man o’ war is a single animal but in actuality, it is a colony of animals that are genetically identical to each other. This group of animals is collectively called zooids.

5:  Physically, it looks like a gas-filled balloon that rises above the waterline to a height of 15 cm or 6 inches.

6:  The upper body is called pneumatophore which is a sail-like crest, about 12 inches long and 5 inches wide, and has submerged tentacles called cormidia, approximately 165 feet long.

7:  The gas bladder contains a mixture of oxygen, nitrogen, argon, carbon monoxide, and carbon dioxide which provides buoyancy and allows it to float on the surface of the water.

8:  They bear stinging cells called nematocysts which produce neurotoxin, making them highly venomous species and paralyzing or killing the prey in one stroke.

9:  These species feeds with the help of tentacles which trap food such as plankton, crustaceans, and small fishes and passed it to the colony.

10:  The member of the colony adapts unique mechanism to communicate with each other, they contact one another by nerve fibers.

11:  Instead of having large tentacles, the Portuguese man o’ war is not capable of moving on his own. The wind, tides, or ocean currents propel them from one locality to the other.

12:  The Portuguese man o’ war reproduces by the sexual method as well as by an asexual method.

13:  Under the water, these species have faced predatory threats, especially from loggerhead sea turtles, blue sea slugs, and violet snails.

14:  Portuguese man o’ war are not commercially important to humans. If approached, they sting and cause severe pain, injuries, breathing, and heart problems.

15:  Due to the unavailability of the data, these species are not being evaluated or listed in the Red list of IUCN.

Portuguese man o’ war is a group of marine hydrozoans which look like jellyfish but in actuality, they are Siphonophore – a group of animals that are genetically identical to each other. If seen from the distance, it looks like a single animal but it is a colony of animals that efficiently work together to survive in harsh environmental conditions.