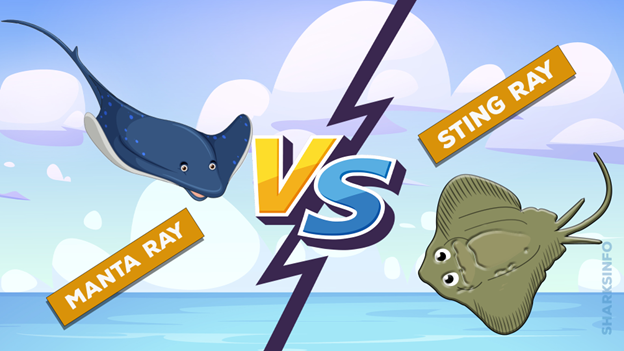 A manta ray and a stingray might look like the same fish, but when it comes to their names and nature, they are almost different species.

The Stingray is a deadly fish that can deliver a poisonous barb through its tail into a victim. The Manta Ray, on the other hand, is a graceful and friendly fish that has no barbs or poison of any kind.

However, at the same time, the two are a bit similar to each other in the sense that they both have powerful suction, and they both can do pretty much the same job. They both belong to the same class Chondrichthyes and the order Myliobatiformes.

In spite of the fact that these two rays are related, they differ in a lot of ways. In addition, since stingrays are poisonous and can hurt you severely, it’s important that you can distinguish between these two animals that look similar.

This blog will look at the difference between a manta ray and a stingray and how you can set them apart.

What are the differences between manta rays and stingrays?

Manta and stingrays have been making the rounds recently. While the two are similar, they have different roles and different uses. The table below will help you to clarify the differences between the two.

It is true that both of these marine animals, the manta rays and stingrays have large, mostly flat bodies and triangular fins and have a lot in common; however, they differ in plenty of other ways. An essential difference between Manta rays and Stingrays lies in their ability to sting; Manta rays lack stingers or barbs, whereas most Stingrays have this ability. Another significant difference is the size, with manta rays being much larger and stingrays being much smaller.