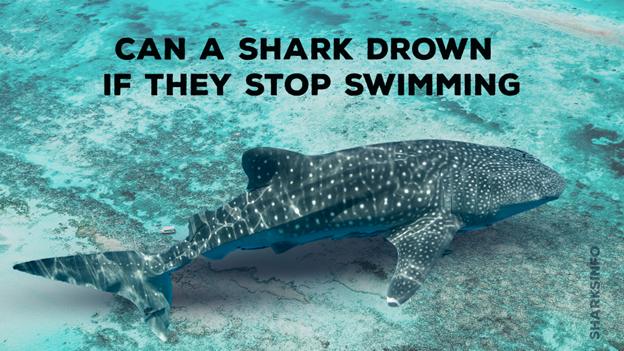 It is a mesmerizing experience to watch a shark swim along with us or see it up close, even when they are known to be aggressive, dangerous creatures. During the summer, especially if you are swimming in the ocean, you may come across sharks, as they are found in most major oceans of the world. However, one thing you won’t see is a shark stop, and it makes you wonder if they swim continuously at all times or can a shark drown if they stop swimming.

Despite spending their entire lives in the ocean, sharks are vulnerable to drowning due to some biological characteristics. It is essential that sharks breathe oxygen to survive. They do not have lungs but instead absorb oxygen through their gills. The lack of oxygen in the water makes sharks unable to breathe and prone to drowning. So, does it require sharks to be constantly on the move? Let’s find out.

Do sharks drown if they stop swimming?

It is clear that sharks will drown in the absence of oxygen. So, whether they will drown or not if they stop swimming depends on how they breathe. Sharks typically will have either of the two breathing techniques as described below.

1: Ram Ventilation: This method involves swimming with the mouth open and the speed of the shark forcing water through its gills. The moment it stops swimming, it ceases to breathe.

2: Buccal pumping: Water is pumped through their mouth (cheek muscles) and over their gills using this method. This method of breathing is used by many sharks today, including nurse sharks and carpet sharks.

The method of buccal pumping allows sharks to stop at any moment they want and continue to breathe without any problems. The majority of sharks utilize both techniques, switching between them depending on their swimming speed.

Keeping this in mind, it is fine for most sharks to stop swimming if they want and continue to breathe, with the exception of those that rely solely on ram ventilation. In other words, we can say that most sharks will not drown even if they stop moving for the time being.

What sharks will drown if they stop swimming?

The species which solely rely on the technique of ram ventilation will drown if they stop. When sharks use ram ventilation, they swim with their mouths open, causing water to rush through their gills faster, resulting in more oxygen being delivered to their bodies. If they stop, there will be no oxygen, and without it, the shark will die. The species relying on this method include some of the well-known species of sharks. A few of them are as follows:

Their gills require constant movement to push water over them in order for them to breathe.

A new quest: Do you know how do sharks sleep when they are swimming all the time?

In spite of sharks being apex predators, the species’ drowning has been mysterious for thousands of years. It was a common perception that sharks would drown if they stopped swimming, but as we have found out, it all comes down to how sharks breathe. In species like carpet sharks, bullhead sharks, and nurse sharks, which breathe through buccal pumping, stopping or remaining motionless will not cause them to drown.