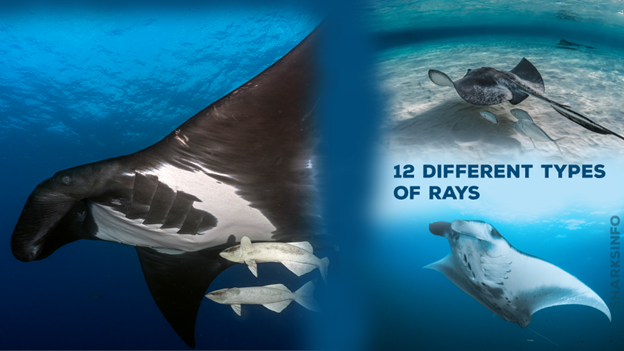 A swim in the ocean is one of the most thrilling and adventurous activities one can indulge in, not only to experience the enchanting waves but also to see the eerie marine creatures, such as rays, which are somehow reminiscent of sharks. Well, you can say they are close relatives to each other in the subclass Elasmobranchii. While sharks are somewhat easy to identify, there has been some difficulty in recognizing the types of rays as there are over 600 species found.

Keeping an eye out for rays is also essential, so you don’t mistake them for sharks and put yourself in danger. Remember, sharks can attack humans. Out of all, let us walk you through the 12 different types of rays that are commonly found throughout the world’s oceans.

What are the 12 different types of rays?

Stingrays, butterfly rays, manta rays, and sawfish are just a few of the types of rays. In fact, rays come in all different variations, spread into over 600 species, and categorized into 26 families. Just like sharks, they don’t have bones but have bones made of cartilage. Moving forward, let’s now see the most common ray you can come across in the oceans.

Known to grow up to 30 feet in length and weigh over 2000 kg, it is the largest type of ray in the world. They hunt for food in the deep scattering layer of the ocean, where they dive hundreds of meters into the open ocean away from reefs. The primary food source of Manta rays is zooplankton.

A few pale spots are scattered on the upper dorsal surface of their body with a scattering of conical and ridge-shaped tubercles. A large and fast animal, the oceanic giant manta ray hardly has any natural predators to threaten it. However, overfishing has been affecting its population over the years.

A common sight among divers, Reef Manta Rays are marine species that inhabit shallow waters along continents and oceanic islands. With a maximum size of about 18 feet, it is the second-largest ray species in the marine world. These species depend on zooplankton prey for survival. Climate change could reduce the abundance of zooplankton, which will then affect the population of this species. A targeted fishery resulting from the demand for their gill plates is also a threat to them.

Also called Bentfin Devil Ray, South East Asia and other locations worldwide are frequent sites for these devil rays. Bentfin devil rays, like other closely related species, eat plankton in the water, which they filter using their gill rakes. Despite its wide range, some fisheries target it, and it is also caught as a bycatch in others, resulting in a decline in its population.

Found generally in tropical regions, White spots cover its dark dorsal surface, and behind the pelvic fins are venomous barbed stingers that help in its identification. Small fish and crustaceans are commonly consumed by spotted eagle rays, who will also dig at the seabed’s sand, looking for food buried there. Surprisingly, these rays are frequently observed leaping into the air.

Often buried in soft sediment, the southern stingray is a moderately sized whiptail stingray that spends much of its time in contact with the seafloor. A variety of invertebrate and fish, including shrimps and crustaceans, makes up the diet of this ray species. Fishing nets targeting other species often capture it accidentally, resulting in its population decline.

The name of this particular stingray refers to its preference for a pelagic habitat, the open sea, unlike most stingrays which live near coasts or bottoms of oceans. There are various species of stingrays, but this species is believed to be considerably more venomous than other stingrays due to its tail being twice as long as its body. Although it rarely comes in contact with humans because of its open-sea habitat, you should be cautious when handling it because it has venomous spines.

A small ray, the species can be found between the foreshore and 100 feet deep – its width is not more than 14 inches. Although the tail has two venomous spines, it will only use them to defend itself when feeling threatened. Private aquarists are drawn to the blue-spotted ribbontail ray due to its beauty and size, even though it is poorly suited to captivity.

Butterfly rays belong to the genus Gymnura and can be found throughout the world’s warm oceans. A wide disc formed by the pectoral fins merges before the head of the butterflies rays, forming a flattened body. A total of 12 species are currently found within this genus, all of which are in different levels of conservation.

Group of rays constituting the order Torpediniformes. Species vary in their ability to produce electric discharges, ranging from 8 to 220 volts, used mainly for defense functions or to shock their prey. In shallow coastal waters, electric rays can be found down to at least 3,300 feet deep. Its tail propels it forward as it moves slowly.

Also called the bow mouth guitarfish, the Tropical coastal waters of the western Indo-Pacific are home to this rare species, which occurs at depths of up to three hundred feet. With a large dorsal and tail fin that resembles sharks, this species of ray has a distinctive appearance.

Commonly found in estuaries and reefs, it is mostly a bottom-dwelling species of stingray but will occasionally swim into open water as well. Their width is greater than their length, making them appear to have a diamond shape. A stinging spine is usually found on the tail of these animals, but they are not aggressive. They attack humans only when in danger.

Its habitat is shallow coastal waters over sandy and coral substrates. Characterized by its yellowish-brown to olive-green upper parts and white underparts, its pectoral fins are small, and its tail is long and thin, with a serrated spine at the tip. Their color and pattern variation makes them good camouflage for ambushing prey when buried in the sand. Due to the fact that they use their spines only for defense, they are considered harmless to humans.

Among the most enchanting sea creatures, rays are widely known. They come in a variety of sizes and shapes and are found in many parts of the world. With outstanding qualities, they are spread into over 600 species. You may not be able to notice them all, but the above-mentioned 12 types of rays are the most common, and you have a good chance to see them while swimming in the oceans.