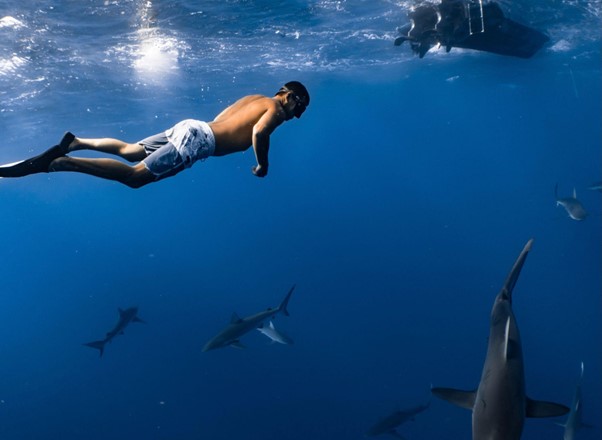 Sharks circling you – it’s not good!

Time to fight back!

The pointed teeth of carnivorous animals keep many people on high alert while enjoying water activities! If you are swimming or splashing water in the ocean, you are inviting them to give you an attacking bite! Sharks – the most influential, sly and deadly creatures of the ocean who rarely attack humans but when they do – the attack leads to fatal injuries!

What if you find yourself being surrounded by sharks? What would you do? Don’t know? No worries! You need to have a plan for an emergency situation! Let us tell you what you would do if you wander into the shark’s waters!

Sharks circling – what does that mean?

Circling sharks around you is not a good gesture shown by sharks, it clearly indicates that sharks are about to attack. If you ever have been in such a situation where you find yourself in the middle of sharks, you must follow some of the actions to protect yourself from the attack of sharks.

What to do when surrounded by sharks?

Although there is very little risk of sharks attacking humans, you must prepare yourself for the tragic circumstances. No matter how unlucky you are, you must know how to handle the situation! We have shortlisted some of the defense tactics that will be helpful if you ever encounter sharks! Let’s begin the training!

If you are swimming in the ocean and you do not want to come in contact with sharks then avoid the area where there are high chances of the shark’s existence. If you are planning to dive deep in the ocean, do it under the guidance of the local tourism authorities, and know the status of sharks in the ocean.

2: Don’t panic while sharks are circling around you

If you are enjoying the ocean water and suddenly sharks come to greet you – don’t panic! Try to move away or get out of the water as fast as you can. Dreading sharks will switch on their voracious mode, so be calm and relaxed because you are not on the menu card of the sharks – they only wander around you out of curiosity.

Sharks follow different attacking strategies like swims right in front of you, circling around you or may give you a surprise by attacking on you from behind – to protect yourself, you must keep an eye contact with sharks if you are planning to run away or to defend yourself against the attack of the shark.

4: When sharks are near – don’t make any movement

Well, there are high chances that sharks will swim away if you do not make any sudden movements, try to move towards the shores slowly without splashing water. Moreover, make sure when you move out don’t try to block the path of sharks intentionally or even unintentionally.

5: If a sharks attack – get into a defensive position

Try to be in a defensive position, this doesn’t mean that you can fight them back, instead find a cover or hiding place in a deep shallow water like any rock or obstruction so that sharks cannot revolve around you.

If sharks approach you by any chance do not try to be smart with them or play dead, instead of playing cheap tactics use any of the defending weapons you have such as spear guns so that you can frighten sharks.

7: Hit the sharks to save your life

If you are in that disastrous condition where you have no chance of running away then this is the time to pay sharks back – punch them either on the face, gills, eye or snout – the vulnerable areas of the sharks, to show them your strength.

If the sharks continue to attack you – don’t back off! Keep on fighting against them by hitting various areas. Although underwater fighting does not provide you with enough power, keep using defense techniques so that sharks will swim away and set you free.

9: Move out of the water as soon as possible

Though if you win the battle against sharks that doesn’t mean sharks will not attack you anymore, you are not safe there, sharks may come back to attack you. So try to get out of the water or ask for the help of nearby boats or people.

Once you are out of the water safely, the first thing you have to do is to take medical attention if any of the wounds or bites you have or if you are bleeding, stop it as quickly as possible.

Circling sharks around you while swimming in the deep oceans clearly shows that sharks are about to attack!. If you ever find yourself in the middle of sharks while swimming then there are high chances that sharks will attack you. They might attack due to curiosity or mistaken identity! But if they attack you, you must follow the enlisted precautionary measure to win the battle against them!