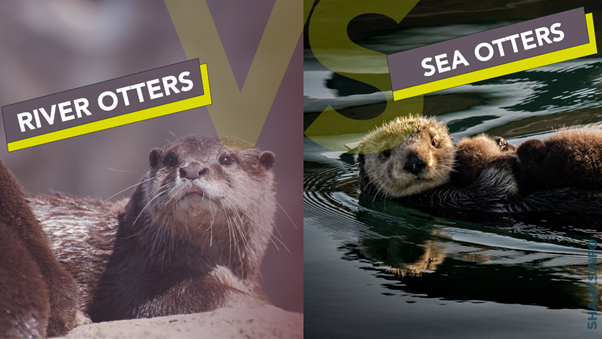 The River otters and Sea otters are one of the cutest sea creatures you’ll see in the oceans of the world. Though you might confuse both and think of them as one specie, that’s not true. We agree that both show affectionate behavior but both of them are quite distant from each other. Let us share some of their unique features with you so you can identify both correctly.

What is River Otters?

With a total of 12 species in the world, river otters are mammals that prefer both rivers and oceans as their home. The most commonly found species of river otter is the North American River Otter, which is found all over the coastal areas of North America. You can see them usually gliding down the muddy hill or on the snow with their bellies.

They prefer to enjoy life in the rivers but they also move to land sometimes usually to mate. That’s why they are called semi-aquatic organisms.

What are Sea Otters?

An inhabitant of the North Pacific Ocean, the sea otter is a marine mammal of which only one true specie is found in the world. As the name suggests, they prefer to live in the seas and do not swim toward rivers at all. Just like river otters, they also sometimes pay a visit to the land to take some rest.

They are known for their floating behavior in the seas and it has been observed that they give birth to one pup at a time and take care of it for 8-12 months.

Here are some differences between the cutest otters to tell them apart.

River otters and sea otters share a fair deal of differences in terms of size, weight, physical appearance, lifespan, habitat, and number of offspring. River otters have a total of 12 species living in the oceans, while sea otters only have one species that needs to be conserved as it has been enlisted as Endangered by the IUCN.