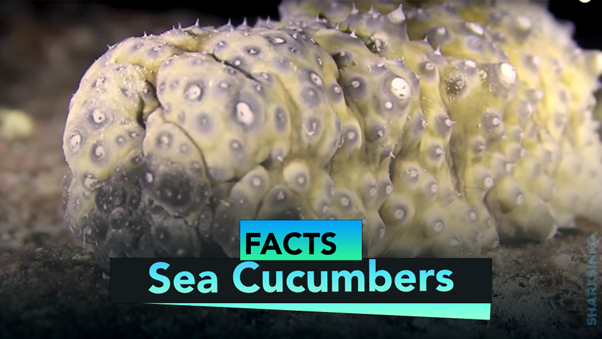 Sea cucumbers, living on the seafloor, are basically echinoderms with more than 1,250 species belonging to class Holothuroidea. These tiny creatures got their name due to their striking resemblance with the fruit of the cucumber plant. They are marine invertebrates providing numerous health and commercial benefits to humans. Let’s take a more close look at them.

There are a total of 6 orders under class Holothuroidea, under which sea cucumbers are classified into different families based on anatomical differences.

Sea cucumbers are tubular in shape, soft-bodied invertebrates with no face or eyes. They possess 20-30 tentacles around their mouth. They use these tentacles to either feed or for locomotion purposes. Upon becoming adults, they exhibit pentamerous radial symmetry. The coloration of their bodies varies from specie to specie. They could be blue, black, red, brown, or green in color.

As there are numerous species of sea cucumbers, so their size and weight vary. However, on average, they can grow between 0.5 inches- 6 feet. They can even grow bigger than that as well in some cases as one of their largest specie, Synapta maculata is recorded to be 7-10 feet long. With their tiny bodies, they can weigh 2.2 pounds only.

Sea cucumbers can be found in all the oceans around the world, both from shallow to deep-sea parts of the ocean. They usually live on the seafloor, as they are benthic, which provides them with readily available food. In contradiction to adult sea cucumbers, their larvae do travel along with the ocean currents.

Sea cucumbers are not efficient hunters but prefer readily available food in their surroundings. They like to feed on:

Sea Cucumber As Food For Humans

Sea cucumbers are commercially important for humans as they are consumed widely for food purposes. They are harvested and dried before consumption in Chinese cuisine. They are considered a dietary delicacy and are a symbol of luxury in Chinese cultures as it is served on special occasions like new year celebrations or weddings.

The research related to their health benefits is rather new, but sea cucumbers have been used in folk medicines for so long. It is for a few years that researchers focused on its benefits and have been trying to determine its benefits for human health.

So far, they found out that sea cucumbers can be effective in healing wounds as they produce bioactive compounds which speed up the process of healing. The significant importance of sea cucumbers is in the treatment of cancer, however, this aspect is still to be studied in depth.

Other than that, sea cucumbers have been found effective in certain biological activities in humans such as:

Do Sea Cucumbers Pose Any Harm to Humans?

Although sea cucumbers provide enormous health benefits to humans, there are some species of them that are known to produce toxins. They release these toxins as a defense mechanism and if it comes in contact with human skin, they can cause acute irritant dermatitis on it. According to reports, chemical conjunctivitis is also observed in people whose eyes got in contact with these toxins.

The most common threat to sea cucumbers is overharvesting by humans for commercial purposes. They are also preyed upon by their natural predators such as sharks, some species of turtles, fish, crabs, snails, sea stars, lobsters, sea otters, seagulls, walruses, seals, and some crustaceans.

Sea cucumbers are tiny and vulnerable, that’s why they have specialized defense mechanisms.

As these species are harvested at large, their species are not in danger of extinction but are considered Least Concern or Data Deficient by IUCN.

Sea cucumbers are soft-bodied marine echinoderms having multiple tentacles around their mouth. They are found living near the sea floor to devour algae. They are commercially harvested for dietary and medicinal purposes by humans and hold great economic importance.