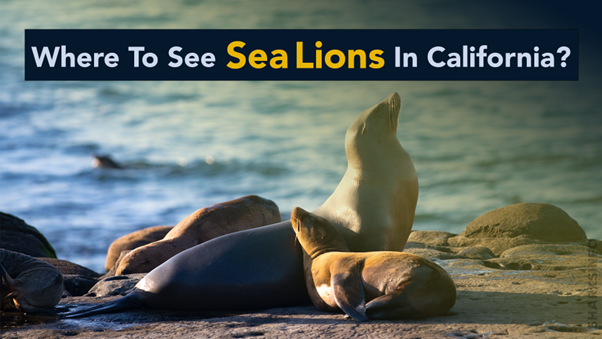 The beaches in California are one of the most splendid points to visit, their beauty, and sceneries attract people the most. Despite all, the sea lion of California is a dominant factor to attract people. Sea lions are popular for their joyful nature, playfulness, and intelligence. The remarkable color schemes and their size add glory to their nature. Let’s see what are the famous destination spots where you can easily meet sea lions in California.

Where To See Sea Lions In California?

In California, you can spot sea lions year around, but the best spot to find them is along the coastal regions. Following are the regions to watch sea lions:

San Simeon has a maximum population of sea lions. One can see them year-round in San Simeon but the peak time of the sea lions is usually January, April, and October. Other than that, approximately 17,000 species of animals including elephant seals have been thriving in the San Simeon waters.

La Jolla is a residential area for several seals and sea lion species. They are found jumping, surfing, basking on the large rocks, and lounging on the sand, showing their extreme happiness. They are very friendly and welcome the visitors by nodding their heads and waving their flippers.

San Francisco is the most accessible state in California to spot sea lions. It has been reported that around 1,700 species of sea lions are living along the coastal regions of San Francisco. As they can find abundant food here and are danger free from predatory animals such as orcas or sharks.

San Diego is another hotspot that is considered the home of several species of seals and sea lions. These species are playful, cuddly, and calm which is why in San Diego there is a law implemented to protect the seal as well as sea lions.

California is famous for its number of beaches and their beauty, but the reason people visit the Californian coastlines is the existence of a large population of sea lions. There is various spot in California, such as San Simeon, La Jolla, San Francisco, San Diego, and Pacific Coast Highway supporting several sea lions, seal, and other animals.