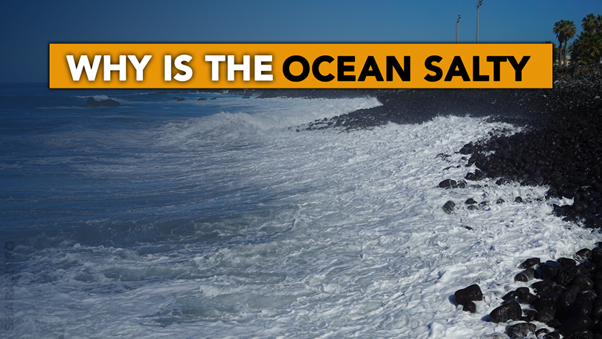 There is nothing much more pleasant than taking a deep dive into the extended ocean, usually in the summer days. But what is the most unpleasant thing? Taking a deep dive, you unintentionally swallow a mouthful of ocean water. what is this – the water is salty? Why is it so? What makes the ocean water so salty? Let’s take a deep dive with us to reveal the mystery behind it. Scroll down!

Why Is The Ocean Salty?

The accumulation of salt over some time makes the ocean water extremely salty. Due to the extreme saltiness of the large water bodies, this water is of no use. There are probably 2 ways by which the salt enters into the oceans – one is either from the rainwater or by opening up of the ocean floor.

How Salt Enters Into The Ocean Via Rain?

When it rains, the atmospheric carbon dioxide makes it slightly acidic, it then flows over the land surface causing the eroding of the rocks, picking up dissolved nutrients and salts and making its way towards the open water bodies. Thus, making the ocean water saline.

How Does Opening Of The Ocean Floor Increases The Salt Concentration?

What Is The Average Concentration Of Salt Is Present In The Oceans?

The concentration of salt in the ocean is extremely high and if it is removed from the ocean, it will form around 160 feet thick layer on the surface of the Earth. According to an estimate, there are approximately 120 million tons per cubic of salt present on the floor of the ocean and the concentration may increase with time as well.

Which Salt Is Present In High Concentration In Ocean?

Well, the ocean contains many dissolved minerals such as magnesium, sulfates, copper, and zinc. Sodium chloride salt which is mostly used for cooking purposes is present in excess amounts in the oceans as well. The studies concluded that sodium chloride ions form about 90% of the total concentration of salt present in the ocean.

Does Saline Water Of The Ocean Pose Any Drawbacks?

Well, drinking saline water accidentally during swimming alters the health of a person because the concentration of salt in the ocean is much higher and it is not possible for the human body to process an excessive amount of salt. Moreover, the excess salt also poses a threat to the life of aquatic species and makes their survival a bit difficult.

Oceans are large water bodies that support a variety of life, as well as they also attract people due to their stunning views. But there is a drawback that the water of the ocean is extremely saline due to the accumulation of salts especially sodium and chloride ions and minerals over time. The salts enter the ocean either from the rainwater or by the opening of the ocean floor due to eruptions or hydrothermal activities. Moreover, excessive salt concentration poses a harmful impact on the life of humans as well as on aquatic species.