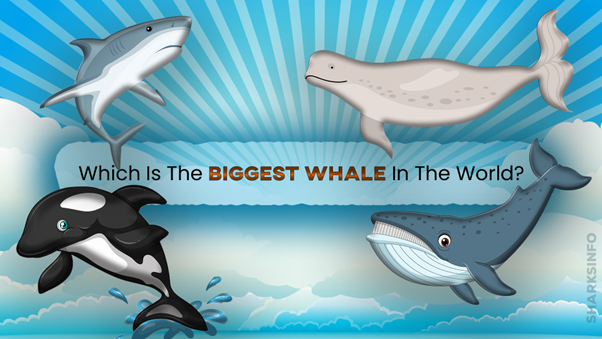 Whales are found in almost all the oceans on Earth because they are the largest marine mammals. The most commonly asked question about them is that though they are the apex hunters of the oceans but what is the largest member of the Whale family? The Whales like all other animals vary in size, and shape and each species attracts people in its way. Let’s figure out the confusion and reveal the name of the mysterious Whale which is known to be the largest animal living on Earth.

Which Is The Biggest Whale In The World?

Yes, you got it right – the Blue Whale.

What Is The Physical Appearance Of Blue Whale?

Blue whales as the name indicates are Blue which slightly varies to bluish-greyish coloration from the upper side and are yellow underneath. They have long slender bodies with a flat but broad head. They have long triangular dorsal fins which are located near the tail. The Blue whale has no teeth instead they have baleen plates that help them in grasping and swallowing their prey.

What Is The Length And Weight Of a Blue Whale?

Why do Blue Whales Grow So Big?

Blue whales are ironically the largest marine mammal on the planet which requires a large amount of foodstuff to keep themselves healthy and to boost their energy level. The studies conducted on the feeding habit of Blue Whales depicted that they can eat about 16 tonnes of food each day which is equal to 12% of their total body weight.

What Does Blue Whale Eat?

Though they are the top predatory animals of the ocean you must be surprised to know that the giant creature feeds on small oceanic creatures such as zooplanktons, krill, shrimps, crabs, octopuses, and small fishes. Just for feeding purposes, the Blue whale travels 5 miles on average per day.

Is The Size Of a Blue Whale Comparable?

Yes, the size of Blue whales is comparable to many items such as:

As Whales are known as the king of the ocean but among all the members Blue whales are the biggest ones, not only in length but also in terms of weight. The Blue whales are Blue which slightly varies to bluish-greyish coloration from the upper side and is yellow underneath. They can be 80 to 110 feet in length and can weigh about 100 to 200 tonnes. The reason behind their bulkiness is that they can eat about 16 tonnes of food each day which is equal to 12% of their total body weight. Further, if you want to understand more about the size of Blue whales then for your ease we have mentioned some of the items to compare the size of Blue whales.