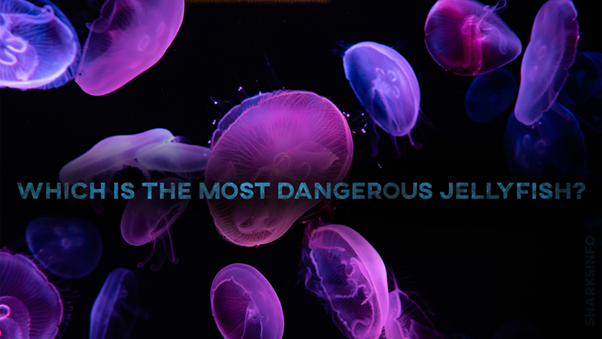 Which Is The Most Dangerous Jellyfish?

Any guess? No! Let us tell you the name of the most dangerous jellyfish that lives under the water.

Yes! Box jellyfish are the most dangerous and deadliest species of jellyfish that live in the oceans. They may not look like dangerous creatures but their sting is enough to cause severe allergy or even death of a person by shock or heart attack.

Where Do Box Jellyfish Live?

More than 50 species of Box jellyfish exist under the water. The Box jellyfish lives mostly in the coastal waters of Northern Australia and Indo – The pacific regions. However, some species are also sighted in the Atlantic Ocean, the Mediterranean Sea, Northern California, Japan, South Africa, and New Zealand. The jellyfish are spotted near the shoreline, especially in the coral reef, mangroves, sandy beaches, and kelp forests.

What Is The Average Size Of Box Jellyfish?

Why Box Jellyfish Is So Deadly?

Well, the Box jellyfish is a highly venomous animal which makes them one of the deadliest species in the world. The jellyfish release toxins which give them 100 times stronger and more poisonous bites than the cobras. The venom they produced is strong enough to kill the prey. Further, the survivors of the jellyfish sting can feel pain for weeks and have permanent scars.

What Is The Role Of Box Jellyfish Tentacles And Eyes?

Box jellyfish have a box-like appearance, they bear more than 15 tentacles that are extended from each corner of the bell. Each tentacle is about 10 feet long and has more than 5,000 stinging cells which are sensitive to touch and chemicals. These tentacles are triggered by the presence of prey in their vicinity. Moreover, they have a cluster of 6 eyes located on 4 sides of the bell which gives them excellent vision and helps the jellyfish locate and grab their prey.

What Happens If Box Jellyfish Sting?

If a person got stung by the deadliest creature of the ocean, the Box jellyfish, the symptoms may appear within 5 to 45 minutes, then he may go into shock or feel severe pain. Other than that, symptoms include blisters, welts, swelling, redness, itching on the stung area, and faintness. Furthermore, the lethal symptoms include cardiac arrest, collapse, difficulty breathing, arrhythmias, or paralysis.

What To Do If Box Jellyfish Sting?

Following are the precautionary measures one should follow if you got stung by the Box jellyfish:

What Other Species of Jellyfish Are Considered Deadly?

Other than Box jellyfish, some of the deadliest jellyfishes are:

More than 200 jellyfishes live under the water, out of which the most dangerous and the deadliest is the Box jellyfish, the sting of which is 100 times more powerful than the cobras. These jellyfish have half tentacles larger than their size which helps them to grab and kill their prey. If they accidentally sting the human, they may suffer paralysis, shock, heart attack, or arrhythmias. So be careful whenever you go swimming, and don’t get distracted by their appearance, because physically the Box jellyfish do not look harmful, but if they sting, then you might visit the graveyard soon.