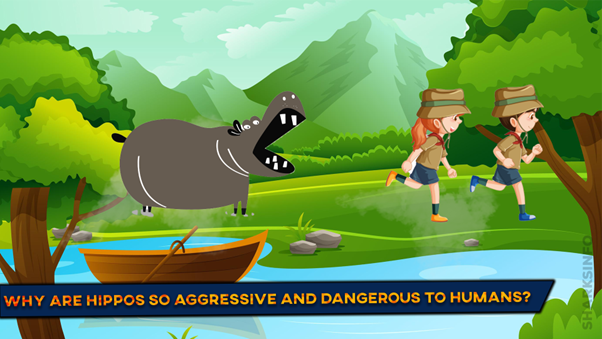 Hippopotamus amphibious commonly known as Hippopotamuses are large animals with round-shaped bodies, native to Africa and water-loving species. The word Hippopotamuses is a Greek word that means “River horse” or “Waterhorse”.  Here, do not relate the Hippos with horses as they both are two different species that are not related to each other in any aspect. Dolphins, whales, and pigs are somehow relatable to them.

After humans, Hippos are the second largest and deadliest mammal living on the Earth. They are herbivorous species that do not bother the existence of other animals in their habitat but when they sense any danger, they become extremely aggressive. Not only to land animals, but the Hippos also become aggressive and poses danger to humans as well.

Before calibrating the level of aggression of Hippos, let us give you a brief description of them. Scroll down!

Hippopotamuses are semiaquatic animals because they are found submerged in the waters for 16 hours a day and are native to Sub Saharan forest of Africa.The Hippos are social animals that are found wandering in a school of 10 to 30 members. They can have a maximum length of 10.8 to 16.5 feet and weigh up to 4 tonnes. They are capable of covering a distance of 20 miles per hour. Although they spent most of the time in the water but interestingly, they don’t know how to swim, the only reason behind their submersion is to keep the skin cool and moist.

That’s a general introduction to Hippopotamuses, let’s move to the main topic.

Why Are Hippos So Aggressive?

Hippos are the most dangerous and aggressive mammals living on the land. The cute and fluffy-looking giant animal is unpredictable and becomes extremely aggressive when it senses any danger or someone tries to break into its territory. To protect themselves from any kind of threat, they exhibit a natural response.

Yes! Hippos do attack humans. According to the reported data, there are more than 500 people which die every year due to the brutal attack of Hippos in Africa. Hippos become extremely aggressive when someone enters their territory, mostly there are recorded cases of their attack on boats or people they come across in the water. However, few studies show that in search of food, Hippos accidentally attack humans.

Is There Any Brutal Case Of Hippos Attack On Humans Reported?

Yes! In 2014, there is a case reported of Hippo’s attack on a small boat that had school children in Nigeria. As a result of this attack, one teacher and 12 students died on the spot whereas the others were severely injured. The conflict between the humans and hippos exists because they feel threatened by humans and overturn them to death.

What Does The Yawn Of Hippos Indicate?

Many people misunderstand the yawn of Hippos and they think of it as nothing more than a yawn. However, in reality, the yawn of the Hippos is a clear-cut sign of their extreme aggressiveness because of the feeling of threat. Humans cannot predict it as a warning and unknowingly drag themselves into a dangerous situation.

Do Hippos Feeds On Humans?

No! Hippos do not include humans in their diet because they are herbivorous species that only eat plants, grasses, and fruits such as watermelon. Though it is quite impossible for them to eat a whole man, they cruelly attack and crush them to death.

Is It Possible To  Survive The Attack Of Hippos?

There is a famous saying – in the light, there is always hope, so yes if a Hippos attacks, there is a chance of survival. Let’s see how to overcome their encounter:

Do Humans Pose Any Threats To Hippos?

Though Hippos attack humans they feel highly threatened by the presence of humans around them. The hunting of Hippos is banned but this practice continues and leads to the disappearance of Hippos. The African people hunt them for meat and tusk. Under these circumstances, bulky mammals are listed as “Vulnerable” species.

The hippopotamus is the largest semiaquatic mammal that is found mostly in the African zone. They are the most aggressive and deadliest animal on the land which attacks not only other animals but also humans when they sense any threat. Although they do not feed on humans their attack is so cruel that it causes the death of a person in one shot. However, with a peaceful state of mind, you can dodge the scary bulky hippos if you ever encounter them.