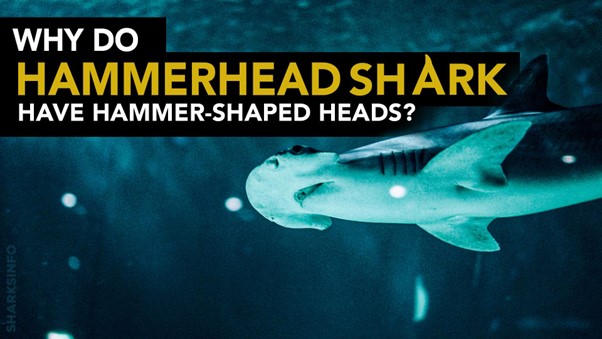 Hammerhead sharks do possess lots of unique features but their most notable feature is their hammer-like heads. Do they have such unique and funny-shaped heads that people always wonder what’s the use of such heads? Is it just the anatomical deformity or it really does have any function to do? Let’s find out why hammerhead sharks have such heads.

The sharks are grey to greenish in hue, with a whitish underbelly. They have a small mouth in comparison to their head, with small serrated teeth, and bulgy eyes that equip them with 360-degree vision. The smallest shark species is about 0.9 meters long, and the largest is about 6.1 meters long.

Why Do Hammerhead Sharks Have Hammer-Shaped Heads?

Hammerhead sharks have unique heads for detecting, observing, and capturing prey. They are fierce predators and their mallet-shaped heads aid in their ability to locate prey. The large size of their heads allows for a greater spread of highly specialized sense organs, which they utilize to find food. Beyond smell and vision, these sense organs are quite advanced.

How Hammer-Shaped Heads Are Beneficial?

The first benefit of having a hammer-like head is related to vision. It would give you a far wider range of vision if your eyes were looking in opposing directions, say, near your ears. Each eye would see a distinct area of the globe, giving you a better understanding of what was going on around you. However, it would be difficult to discern how far away things are.

To compensate for this trade-off, hammerhead sharks have a special organ named ampullae of Lorenzini that is present just underneath their hammerheads. These pore-like organs are capable of detecting electricity.

The pores function essentially as a metal detector, sensing and identifying prey buried beneath the sand on the ocean floor. These sensory organs are found in regular sharks as well, but hammerheads have more. The more the distance between the sensory organs, it is easier to locate the prey.

Hammerhead sharks have hammer-like head to detect, observe, and capture the prey as the location of eyes on the sides of the head help them. They have special sensory organs which also help in detecting the electrical signals released by prey. Thus, the head of hammerhead sharks is of great importance to them for their survival.