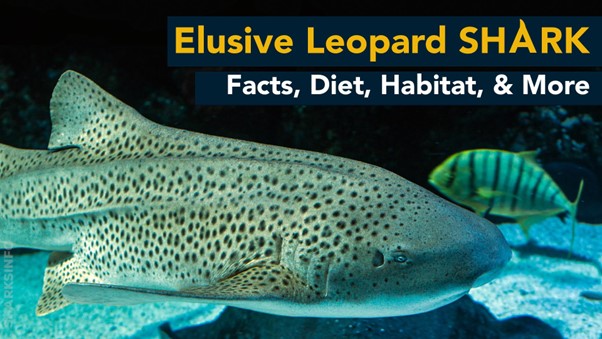 Immediately identifiable due to its striking pattern of black spots on the body, the leopard shark is known for its elusive behavior in the ocean. They belong to the family Triakidae and are found in the coastal areas of North America. They are active predators, yet do not move between wide areas. Let’s explore a bit more about these sharks.

The coloration of elusive leopard shark varies from silvery gray to the shades of bronzy gray-brown. Their color allows them to easily camouflage themselves in the depths of the ocean. The leopard shark has a rounded snout, huge and oval eyes, triangular pectoral fins, and two large dorsal fins in addition to the dark spots, which are quite distinctive features of them.

Leopard sharks, unlike other species, are known to reside in a specific location rather than often moving vast distances. Their natural habitat is near coasts with sea depths of less than 13 feet. They are found in the Northeastern Pacific Ocean and the temperate waters of Coos Bay.

Leopard sharks’ diet varies according to the area they reside in. Leopard sharks are omnivores, meaning they eat a wide variety of marine animals. They will pick up crabs, shrimp, fish eggs, squid, clam siphons, and other small bottom-dwelling species as they travel along the seafloor. They also consume bony fish, worms, octopuses, and bat rays as a food.

Aside from where the sharks dwell, the season, age, and body size all have a role in what leopard sharks eat. For example, as they become older, they eat more fish, whereas, in the beginning, they eat more crustaceans.

In leopard sharks, the mother hatches the egg internally and then gives birth to the young ones after a few months. The young ones develop inside the mother’s body without a placenta. The breeding happens usually from April to May and females follow an annual reproductive cycle.

On average, the leopard shark can live as much as 30 years.

The conservation status of elephant sharks has been regarded by IUCN as the Least Concern.

There are no known predators of leopard sharks except some bigger shark species, as they are well-known for their elusive behavior. Other than that, overfishing for commercial purposes is also causing a decline in their number. Their late age of first reproduction is also causing their number to go down.

Elusive leopard sharks are small sharks with black spots on their bodies, they live in specific locations for years and are known for their swift elusive behavior. They consume a wide variety of food and reproduce once a year. Their conservation is necessary, otherwise, they can go extinct in the coming years.