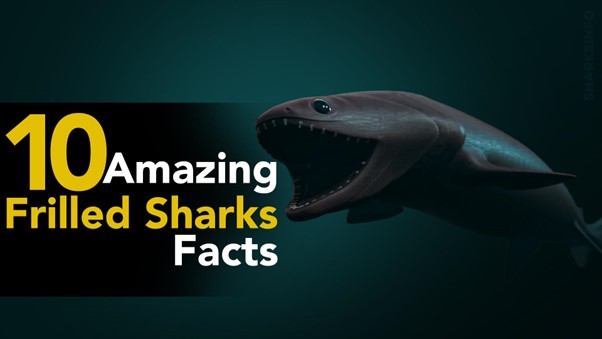 Frilled sharks, having an eel-like appearance, are considered living fossils due to their physical appearance. They were known to went extinct but recently have been spotted in the rivers of Japan. Thus, a new interest has been sparked in people to know more about this snake-like shark. We will share some amazing facts about frilled sharks so keep reading.

Here are some amazing facts about the living fossil of the ocean.

Frilled sharks are not very pleasant looking but they got their unique name because of their gills. They have a total of six-gill slits which make a frill around their throat, thus the name. Each of the gill pairs has a red fringe on its edges.

Due to their appearance, they are also called “lizard sharks and scaffold sharks”.

Frilled sharks have terrifying mouths and the teeth they possess are intense. Their teeth have evolved over time to hold onto soft-bodied prey like cephalopods. They have almost 300 triple-pointed teeth in their mouth but their bite strength is average, that’s why they prefer easy prey.

One of the many reasons for their extinction could be their prolonged gestation period. Frilled sharks take 42 months to reproduce, and it’s a long time to survive human activities or predatory attacks. The destruction of natural habitats and overfishing have might cause their supposed extinction.

Frilled sharks prefer solitary mode in life, but only come together to mate. Otherwise, they prefer to stay, roam, and prey alone in the oceans. They follow the process of internal fertilization, so, once a pup is born they don’t care for them but go back to their solitary life.

5: They Are Not Extinct

Believed for a long time that the frilled shark has gone extinct, it proved wrong when a specie of frilled shark was last spotted in 2007. After that, many marine researchers have been trying to find out if there are other specimens of species alive or not. There is a potential threat that climate change might be pushing these monstrous sea creatures to come out of their comfort zone because they were rarely seen by humans before.

Frilled sharks are referred to as living fossils due to a reason. They are known to be the descendants of sea creatures living between 360-300 million years ago (Carboniferous period). They have not evolved significantly over the period but still have the same physical and anatomical features.

Frilled sharks’ appearance is compelling enough to tell you that they have been ferocious predators who preyed upon various types of cephalopods including octopuses, squids, as well as sharks, and fish. It is believed that they use to swallow the sharks as a whole.

Not only does their appearance resemble snakes but their style of attack is similar too. They use their posterior fins to launch themselves at their prey and consume the half body of the animal slowly consuming it all.

Frilled sharks are a perfect example of sexual dimorphism. The females of frilled sharks are significantly larger than their male counterparts. It is probably because females have to carry the pup for a longer period of time, while males only come around to mate.

on Frilled sharks probably had been preyed upon by their natural predators. Research revealed that frilled sharks found sometimes have their tails’ tips missing, which is probably because of unknown predatory attacks.

The frilled shark is known to be a living fossil but it is one of the ferocious predators with sharp teeth, a long gestation period, and solitary behavior. It was last spotted in Japan, and it is expected with drastic changes in climate, their sightings could increase in near future.