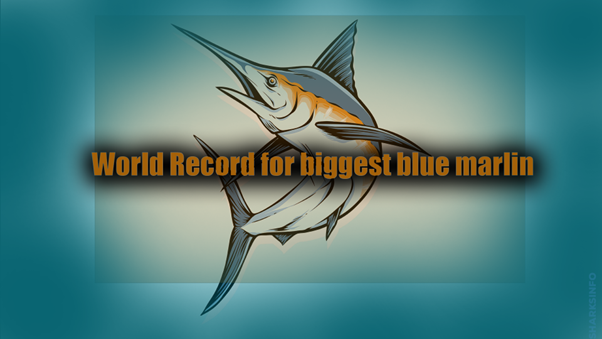 The Blue Marlin belongs to the genus Makaira, they are the most impressive and incredible creatures of the fish world. The Marlin is an extremely powerful fish because of its giant size. Many species fall under the category of Marlin like Black Marlin, Atlantic Blue Marlin, Pacific Blue Marlins, and Striped Marlin. But among all, the Blue Marlin is the largest one. Scroll down to find out what this stunning creature has made any world record.

The largest Blue Marlin ever caught is the Pacific Blue Marlin. It was caught on May 31st, 1982 by an angler named Jay de Beaubien. Jay de Beaubien fought with the giant creature for 40 minutes. The measurement of the Blue Marlin depicted that it weighs about 1,376 pounds and is 5 meters long. This measurement sets the IGFA All-Tackle World Record.

The world record was made by Blue Marlin, caught by angler Paulo Amorim from Victoria, Brazil on February 29th, 1992. The Marlin weighs about 1,402 pounds and is 162 inches in length.

Another record made by 2 Atlantic Blue Marlins, one weighing about 1,157 pounds, was caught by an angler Jean-Paul Richard from Madeira. The second was caught from the same locality that weighs about 1,028 pounds.

Some Other World Records Of Marlin

Other than Blue Marlin, some other members of this group also holds world records given below:

From the open waters of Cabo Blanco, Peru, A Black Marlin was caught on 4th August 1953 by an angler Alfred Glassell Jr. the species weigh about 1,560 pounds and are 174 inches in length. The angler spent 1 hour and 45 minutes catching the fish.

Striped Marlin, caught from the New Zealand waters holds the world record for the largest species. The fish was caught by an angler Bill Boniface on January 16, 1986. The weight of the fish measures about 494 pounds.

White Marlin, was caught by an angler Evandro Coser from Vitoria, Brazil on December 8, 1979. The species weigh about 181 pounds, 14 ounces, and measures 107.5 inches in length.

Among all the members of the Marlin, the Blue Marlin is the largest member and one of the biggest fish in the ocean. Amazingly, due to their giant size, the Blue Marlin has set many world records. The speed of Blue Marlin makes them difficult to catch but it would be a great achievement if trapped in a fishing net.