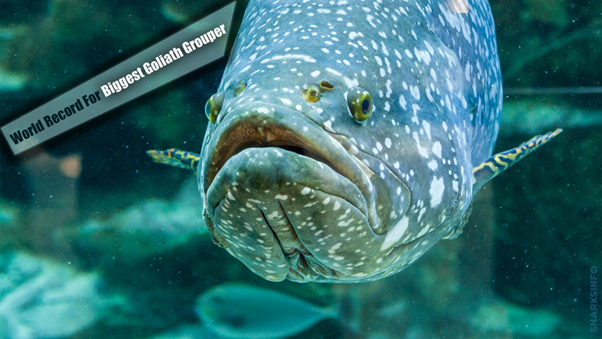 Among the bony fishes, the Groupers are the powerful fighters. Many species fall under the title of Grouper but none of them are as popular as the Goliath Grouper. These species have enormous size and weigh hundreds of pounds which allows them to hold a world record. Scroll down to find out the world records of the Goliath Grouper.

What Is The Size Of Goliath Grouper?

Goliath Grouper are the fastest swimmers that have long and sturdy bodies that can grow to a maximum length of 7 to 8 feet and are about 800 pounds in weight. Due to their enormous size, they are very difficult to catch. Moreover, they are terrifying creatures that are known to attack humans severely.

Why does Goliath Grouper Have Fearsome Nature?

The large size of the Goliath Grouper makes them an extremely dangerous species of oceans. They are solitary species that had undergone many evolutionary changes which makes them at the top of the food web. They feed on almost everything they found which is why they are the top hunters of the ocean without any predators except humans.

The largest Goliath Grouper weighs about 680 pounds and can reach up to 7 feet. The angler caught the fish on 20th May 1961 after spending 1 hour on Fernandina Beach, Florida.

Another member of Goliath Grouper was caught in the Floridian waters that weigh about 800 pounds – the records are not broken till today.

Recently, in June 2021, a member of Goliath Grouper was caught by an angler that weighs about 500 pounds and can grow to a maximum length of 7 feet.

Some Other Record Holder Grouper

Other than Goliath Grouper, some member of the grouper family also holds world records:

1:  Mottled Grouper:  The Mottled Grouper was caught that weighs about 109 pounds by Alberto Peralta on August 13, 1996, along the Eastern coast of Gibraltar.

3:  Potato Grouper: In the open waters of Miyako Island in Okinawa, Japan, Takayuki Shibayama caught a record grouper of 171 pounds on June 11, 2004.

Though Groupers are the enormous and most powerful group of bony fishes that holds many world records. Among all the members, the giant Goliath Grouper are the largest species of the family that are mostly sighted in the shallow water of Florida. Other than that, many species of the Grouper family also made world records that are unbreakable today.