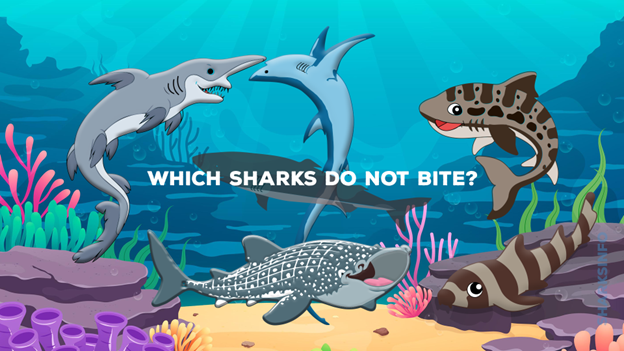 With their giant mouths and serrated teeth, sharks are perceived as dangerous animals capable of tearing humans and animals apart. Taken as bloodthirsty giant beasts, not all shark species can be categorized as the most dangerous. Throughout the world’s oceans, there are more than 500 species of shark, each with its own level of danger or aggression toward humans.

Here is a comprehensive list of shark species that do not bite or are least dangerous to humans.

Whale sharks are the world’s largest fish, growing to approximately 60 feet in length, and one of the gentlest sharks in the ocean. As filter-feeders, they swim with their mouths open, gathering tiny microorganisms and plankton along the way. In spite of having teeth, the fish do not bite, nor are they aggressive enough to attack people. These magnificent creatures are often seen swimming peacefully together with swimmers.

The basking shark is a slow-moving filter feeder that feeds on plankton. As far as size goes, it comes in second only to whale sharks. It reaches 12 meters in length when it is mature and weighs approximately 21 tons. The fact that these sharks are filter feeders makes it clear that they aren’t dangerous species and do not bite. In the open water, its mouth is often open as it feeds on plankton near the surface.

The megamouth shark is a large, extremely rare species of lamniform shark. It is distinguished by its extremely large mouth, which can reach up to 1.5 m in width. It is one of only three identified species of shark with filter pads in its gill slits. The other two are the basking shark and the whale shark.

Even with their big mouths, they are not known to bite nor be involved in attacks as they mostly spend their time in deep waters.

Bamboo sharks are small, bottom-dwelling sharks that are found in the shallow waters of the Indo-Pacific region. These sharks get their name from their habit of hiding in the hollows of bamboo stems and other similar places. Bamboo sharks are nocturnal predators that feed on small fish, crustaceans, and mollusks. These sharks are relatively harmless to humans and are often kept as pets.

Nurse sharks are slow-moving, bottom-dwelling sharks. As nocturnal species, they spend the day resting on the sea floor in large groups. Their diet consists of a variety of small fishes, crustaceans, and mollusks. These sharks are known to be relatively docile and are not thought to be intimidating to humans.

Found in tropical and subtropical waters around the world, usually over sandy bottoms or in sheltered reefs, these sharks grow to a length of up to 7 feet. Relatively slow-moving sharks are often seen swimming in large groups; they are opportunistic feeders, and their diet includes small bony fish, squid, crabs, and shrimp. Leopard sharks are not considered to be a threat to humans and are often seen as gentle species of shark.

Angel sharks are a type of fish that are known for their ability to swim at high speeds and display surprising quick bursts. They are found in tropical and subtropical waters all over the world and are a popular choice for aquariums and fish tanks. Angel sharks are predators, and their diet consists mostly of other fish, although they will also eat squid, crustaceans, and small mammals.

As adults, these sharks can reach a length of 4 to 18.0 feet. Their primary diet consists of crustaceans and large fish, including other sharks. The animals are usually harmless but become aggressive when provoked.

The Greenland shark (Somniosus microcephalus) is a large shark of the family Somniosidae (“sleeper sharks”), native to the cold waters of the North Atlantic Ocean. It is one of the largest living species of shark and among the longest-lived vertebrates in the world. A slow-moving bottom-dweller, typically inhabiting depths of 490–6,560 feet, hardly comes in contact with humans and, therefore, isn’t likely to bite.

The thresher shark is a large species of shark that is easily distinguished by its long, whip-like tail. The average thresher shark grows to be about 20 feet long. There are no reports of thresher shark attacks on humans despite their large size.

The goblin shark is a deep-sea shark, the sole living member of the family Mitsukurinidae. It is a slow-moving shark that can extend its jaws to enormous sizes, allowing it to capture prey much larger than itself. Humans rarely see this fish because it’s found in deep waters worldwide. Its diet consists mostly of fish, but it has also been known to eat squid, crabs, and other small animals.

The goblin shark is a rare sight for humans, as it inhabits the deep waters of the ocean. It is not considered a threat to humans and is not known to be involved in any attacks.

In the world, sharks come in a variety of types, and not all of them are harmful to humans. In fact, some sharks pose very little threat to us at all. There are those who don’t bite, such as the nurse shark, thresher shark, filter-feeder shark, Greenland shark, and many others on the list. Generally, sharks do not aggressively attack humans and may shy away if they are not provoked.