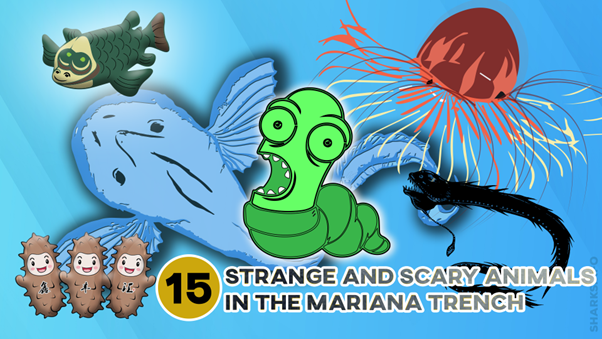 You can’t reach the bottom of the Mariana Trench, located in the Pacific Ocean, with no equipment, as you would run out of oxygen. Considering that it’s the deepest spot on the planet, it’s certain to be full of marine creatures we’ve never seen before.

It was thought that sharks were the strangest animals until recently, but after you see the strange animals in the Marina Trench, you will forget about sharks. To your surprise, some species of sharks may also make up their names on the list. So let’s find it out.

Strange Animals In The Mariana Trench

One of the world’s most varied ecological units, the Mariana Trench harbors some of the most intriguing and surprising creatures on Earth. Well, we are here to look out for the strange animals OF Marina Trench, and that includes the following.

There is quite a bit of fame surrounding this creature that has a bright lure on the end of its head that attracts prey. As a carnivore, anglerfish are specifically evolved for capturing prey. These species have powerful heads that are covered in enormous, hook-like teeth that point inward to grab prey more effectively. The anglerfish has a jaw and stomach that can extend to take in prey twice its size of itself.

It is known that Dumbo octopuses live at the deepest depths on earth. Their gelatinous bodies allow them to survive at such pressures. When its body is exposed to surface pressure, its body cannot function normally as it naturally inhabits the deep pressure. This aspect alone makes the species as the strangest animal you can ever find in the Marina Trench.

Its name comes from the fact that it is a ferocious predator that inhabits deep oceans. While these fish are quite small, they are apex predators with hook-like teeth and enormous jaws. Furthermore, their neurocranium can hinge, allowing their jaw to open more than 100 degrees, which allows them to eat prey that is almost double their normal size.

They get their name from their barrel-shaped, tubular eyes, which are typically directed upwards to detect prey. It is also possible for fish to direct their eyes forward. Barreleye Fish have transparent heads filled with fluids and flat fins that allow them to stay still and move precisely, even in deep water.

They are small jellyfish with vivid red coloration, unlike most jellyfish, which have a clear coloration. Their appearance resembles that of an alien. As many as 1,500 wispy red tentacles surround the creature’s body, allowing it to pass unnoticed in the dark and remain hidden from predators and prey.

There’s something horrific about zombies when one hears the term, which conjures up images of the undead gnawing on the brains of their victims. Zombie worms, or Osedax, are living creatures that prefer to eat bones from dead whale carcasses that have fallen to the ocean floor. A special root tissue secretes acid to allow zombie worms to drill into the bones.

Since the frilled shark hasn’t changed in millions of years, it is considered to be a living fossil. As with snakes and eels, frilled sharks will lunge toward their prey whole to capture it with their hinged jaws. In its frighteningly large mouth, the frilled shark has more than 300 needle-like teeth that are capable of tearing into pieces whatever it consumes.

Sea cucumbers are marine animals with leathery skins, and long bodies found worldwide at the bottom of the sea. Their resemblance to cucumber fruits has earned them the name sea cucumbers. Most cucumbers nourish themselves by eating plankton and decaying organic matter.

It is a fearsome and scariest species of Mariana Trench that has a snout that gives the appearance of a pointy sword. They have been sweeping the depths of the Mariana Trench and other parts of the ocean for millions of years. Their remarkable feature is the detection of prey by sensing even the slightest electrical current.

Amphitretus pelagicus is also named Ghost Octopus as it has a transparent body that let it hide really well in the depths of the ocean. Its body is only 8 inches long and is equipped with eight arms and rotating tubular eyes that pop out of its head giving it wide vision of the ocean, thus the name Telescope Octopus.

No, it’s not a blood-sucking vampire but is a unique cephalopod that is neither squid nor octopus but is placed in order Vampyromorphida. It gets its name because of its dark appearance and cape-like skin connecting with its arms. It has a gelatinous body and can grow upto 1 foot.

Composed of thin stalks, growing upto 50cm, the ping-pong tree sponge is a carnivorous species of Cladorhizidae. On the top of thin stalks, there are stems radiating on which exquisite globules are present. These globules are covered in spicules which play a major role in capturing and consuming the prey.

As the name suggests, its mouth is full of long, menacing, and pointed teeth. It catches and hangs its prey of any size with these fangs. It reaches a maximum length of 6 inches with a coloration of dark brown or black. It has small and spineless fins on its body. Though they are deep-sea predators, they do migrate to the surface of the oceans sometimes at night.

Notable for using groups of cilia to swim across the oceans, the comb jellies belong to phylum Ctenophora. They are invertebrates like other jellyfish and have transparent bodies with bright bands on them. As they swim, their cilia diffract light which creates a rainbow effect in the ocean.

True habitants of the Mariana Trench, Mariana Snailfish is a smooth-skinned creature with a body coloration of pinkish-white. It has a record of the deepest fish being captured from the ocean floor for further studies. It gives the appearance of tadpole-like and can only reach upto 11 inches in length.

As the deepest part of the ocean, the Mariana Trench is home to some of the most inimitable animals on earth. This list offers an insight into the strange animals such as the frilled sharks, angler fish, and Dumbo octopus that live in the world’s deepest ocean Trench. These animals have adapted to the extreme conditions in the Trench and have little to no competition.