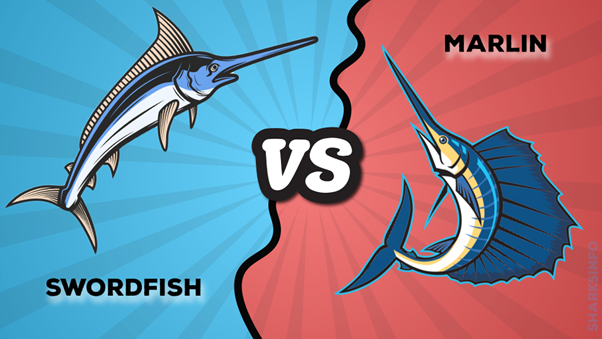 Common in the world’s tropical and subtropical waters, members of billfish are noted for their elongated and spear-shaped snouts. Among them, the most common members are swordfish, marlins, and sailfish. They all do share some classic structures which make them a part of the billfish family but what if someone needs to differentiate between them? Well, here’s your guide to see how swordfish and marlin are different from each other.

What Is A Swordfish?

A member of the billfish family is usually found roaming in the Indian, Atlantic, and Pacific Oceans. Swordfish are considered one of the fastest and most aggressive predators among many others in the ocean. Due to their physical appearance having elongated bodies and pointed snouts, they are also known as broadbills.

Marlins are also members of the billfish family, but they do share physical and anatomical differences from swordfish. The color and physical appearance of marlins make them recognizable in the ocean very easily. They live near the surface of the Atlantic, Indian, and Pacific Oceans.

At first glance, due to pointed snouts, both species might resemble each other. But there is a number of differences that one can learn to distinguish between them.

18 Big Differences Between A Swordfish Vs. Marlin

Here are some major differences that can tell apart these two members of the billfish family from eachother.

Swordfish have long and flat snouts while Marlin has smooth and round snouts, which is one of the many differences between them. Though they are from the billfish family, they are different in terms of appearance, habitat, feeding habits, teeth, taste, anatomical features, size, weight, and lifespan. Keeping in mind all these differences, one can easily spot which one is swordfish and which one is marlin in the ocean waters.