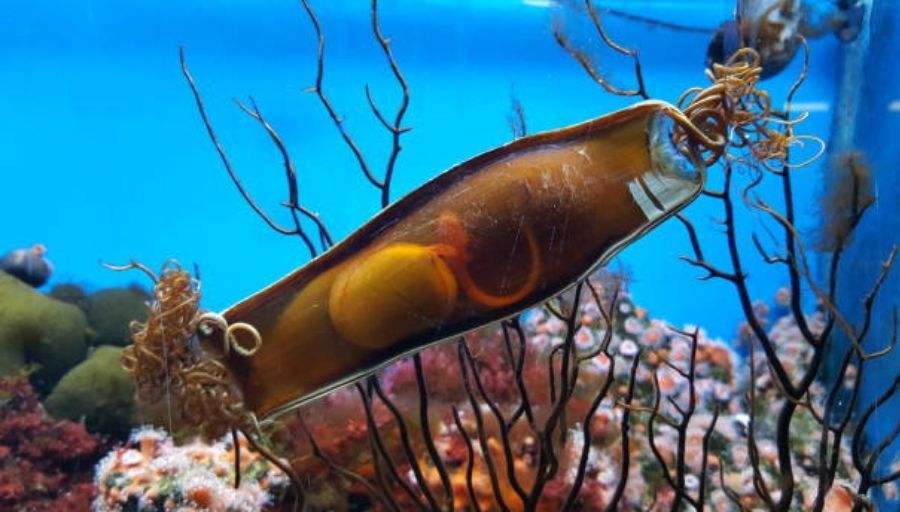 The first stage in a sharks life cycle is fertilization. Mating amongst sharks is somewhat elusive, rarely seen by researchers and scientists.

Fertilisation of the female egg occurs internally. The male’s pelvic fin (the fin on the underside of the body, close to the tail) has evolved into claspers, a pair of organs that can best be compared to a penis in mammal species.

The second stage in the life cycle of a shark is incubation. Sharks use one of three ways to carry their young : 1) Oviparity, 2) Viviparity and 3) Ovoviviparity.

The gestation period for ovoviviparous species is not known for sure. However, it is thought to be anywhere from several months to over two years.

There have been isolated cases of asexual reproduction as well, meaning that the female has managed to conceive and birth pups without any input from a male.

Stage 3: Birth Of A Shark

The third stage in the life cycle of a shark is birth. Unlike most other animals, sharks generally do not care for their young. As soon as pups are born into the water, they swim away and care for themselves.

Some sharks give birth to litters of up to 100 babies at a time, while others may have as few as two or three. The Great White Shark gives birth to approximately three to 14 pups at a time. In almost all cases, all of the pups are beable and well-developed.

This is in stark contrast to many other animals (such as several fish species and some turtles), which give birth to large numbers of ill-developed young (in effect, producing quantity over quality).

The fourth stage in a sharks life cycle is the growing period. Most sharks stay close to their place of birth until they’ve grown into adulthood. Since most sharks are born in coastal areas, many of them die due to to human impact on their enviroment.

It can take a shark 15 years to become an adult. Growth is very slow and many sharks die before they reach adulthood.

The last stage of a sharks life cyle is adulthood. Once they reach adulthood they can reproduce. Reproduction in sharks isn’t the same as with most other animals.

A male shark has two ‘penises’ (also called claspers) so they can grab onto a female to insert the sperm.

Most sharks die after 20-30 year. But some live over a century like the Spiny Dogfish and some Whale Sharks.