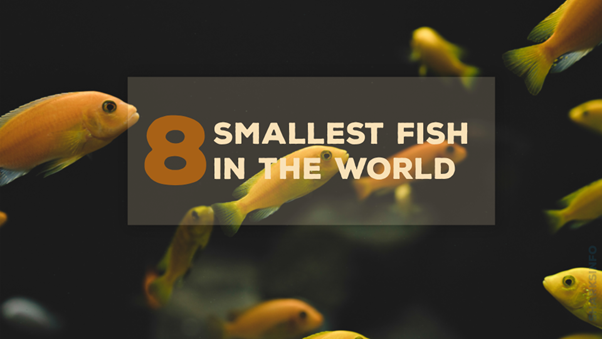 The ocean is home to thousands of marine creatures including 30,000 and more species of fish. All are distinct from eachother in terms of appearance, habitat, and habits. However, these fish can be classified into a ranking based on their certain features such as size and weight. In this article, we are going to introduce you to the list of the smallest fish present in the ocean. Let’s go.

8 Smallest Fish In The World

Some of the tiniest fish, known till now, found in the world either in your aquariums or springs and oceans are following.

The smallest known vertebrate belonging to the anglerfish family, the Photocorynus spiniceps is also listed as the smallest fish in the world, though some people still disagree on that.  The male of this specie is smaller than the female and survive by attaching itself like a parasite to the female body. The male upon getting mature sexually achieves its maximum height which is 0.25-0.3 inches and the female is thousands of times larger than him.

The males have very faintly pigmented skin and their eyes have degenerated. These fish are commonly found in the waters of the Pacific Ocean. The sole purpose of the male of this specie is to play a role in reproduction. It cannot take care of itself on its own nor can feed, that’s why it prefers to fuse with its female counterpart.

Native to Australia’s Great Barrier Reef, a specie of the family Gobiidae, the Stout Infantfish is number second on the list of the smallest fish in the world. Both male and female counterparts are tiniest and grow upto 0.3 inches and 0.33 inches, respectively.

The females are some millimeters larger than their male partners. The species gets its name Infantfish because of the phenomenon of paedomorphism (infantile characteristics retain till the adult) which these fish exhibit.

It has been believed to be the smallest fish in the world in terms of weight and density.  It is found in the Indonesian Islands and is a specie of tiny cyprinid. The female of this specie only grows upto 0.41 inches and the male grows upto 0.39 inches. The smallest specimen of this specie measure to date only reaches a height of 0.31 inches.

The genus Paedocypris includes most of the world’s smallest fishes, most of which are still not discovered. Talking about their physical appearance, they only have rudimentary skulls which let keep their brain open and exposed. The males use their pelvic girdle to mate with the females.

A specie inhabiting brackish water in Southeast Asia, belonging to the subfamily Gobionellinae, dwarf pygmy goby is next on our list. The female of this specie can grow upto 0.59 inches while males achieve a height of 0.43 inches, but on average, males can only grow upto 0.35 inches.

This specie prefers to spend life and reproduce sexually in freshwater habitats. As these are small species, they feed on plankton. However, their number is rapidly decreasing because they are transported at large to be kept in aquariums.

It closely resembles the other species of dwarf goby and it gets hard to tell them apart. They reach upto the length of 0.39 inches. It is known to inhabit the deep coral reefs in the oceans and is found in the waters of the Indian Ocean.

The body of this specie is semi-transparent and of fading orange color. It is an extremely rare species but is found in abundance in the oceans, that’s why the conservation status of this specie is Least Concern.

As we move forward in the list, the size of the fish gets bigger as compared to the smallest fish. This specie belongs to the ray-finned fish family and is an inhabitant of tropical freshwater. Normally it can grow upto 0.7 inches which makes them considered nano fish.

They are kept in aquariums due to their beauty as their body is covered with red and pink color. The vibrant coloration and stripes on the body make them look appealing.

Growing only upto 0.8 inches, this specie of dwarf goby is the inhabitant of Corfu which is located in Greece. Unfortunately, not many specimens of this specie have been spotted and researched that’s why there is little to no data available on them.

However, a few years back a group of researchers collected nine specimens of this specie from Korission Lagoon and claimed that these species can be distinguished from other members of their family based on morphological and genetic characteristics.

Commonly known as galaxy rasbora or celestial pearl danio, this specie is native to Inle Lake. It belongs to the family of Cyprinidae and can only grow upto 0.79-0.98 inches. They can only live for 3-5 years with a consistent diet.

They are called by different names because they have golden spots on their dark bodies and bright orange-red fins. Their beauty has compelled people to keep them in aquariums.

The photocorynus spiniceps is the smallest fish found in the ocean with a female ranging in size to.25-0.3 inches and the largest male being a quarter inch long. Other than that, the species of marine goby also make it to the list of smallest fish in the world.  If you want to encounter any small fish, that won’t be an easy task unless you keep some in the aquarium-which we don’t suggest as it causes a serious decline in the number of those fish species.