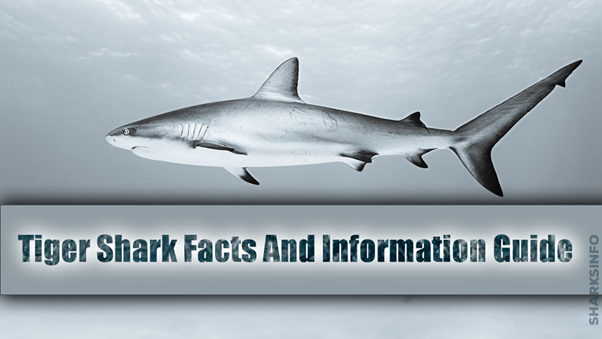 Among many lethal- blood-thirsty sharks; the tiger shark is also considered baneful as it likes to gollop humans and whatever it finds to chomp off. Let’s discover new, amazing facts about tiger sharks…

Some Flabbergasting Facts About The Tiger Shark:

Characteristics of Tiger Sharks And Their Appearance

There are many attributes of sharks that make them different from other marine fishes.

These Sharks are big upto 11-14ft long and the weight varies according to length. It weighs 850- 1,400 pounds. Great white sharks are the biggest- huge sharks and the second is tiger sharks both are carnivorous and also eat humans.

The name suggests itself that they are somehow related to tigers; the stripes on the tiger are of the same pattern as on tiger sharks but the color differs and so do the other physical features. This shark has dark gray stripes resembling the real tiger. It has the ability to camouflage its skin inside the water so it can attack its prey. Its small and broad teeth can bite and break strong hard materials like bones and even turtle shells.

Tiger sharks ingest nearly all crustaceans, dolphins, mollusks, rays, sea birds, seals, and even turtles… it even consumes dead whales and also eats small sharks; it may be possible that it may eat small tiger sharks too.

After the Great Whites, the tiger sharks have caused over thirty-four humans in fatal conditions and over ninety humans in nonfatal situations. Tiger sharks almost attack every other carnivorous animal as it is curious to taste all animals.

Specifically, tiger sharks can not withstand global warming; so due to this abominable problem, many sea animals along with land animals suffer, and even plants and humans face bad health.

Due to human fishing and shark finning, it is regarded as a Near Threatened species. Humans should stop hunting tiger sharks.

Tiger sharks are fearsome predators known for devouring almost anything they come across or manage to catch. Among other things, they have been observed to consume a wide variety of fish and invertebrates, seabirds, sea turtles, and some marine mammals. It has been observed that a number of tiger sharks consume trash causing a decline in their number. To save these sharks, humans must stop polluting the oceans.