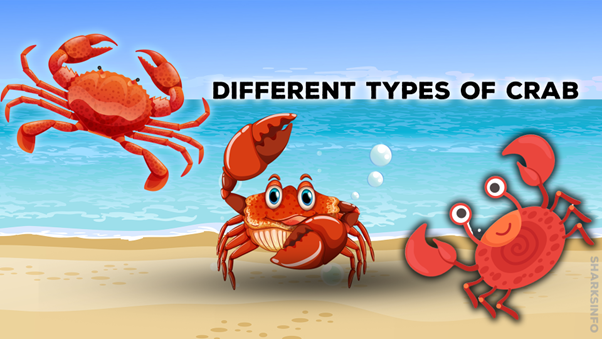 Crabs are classified under the category of crustaceans, they are the most ancient species living on the Planet. The fossil records of the crabs show that they have a history of more than 450 million years. Crabs are decapods omnivorous species which feed on everything they found in their vicinity. According to an estimate, about 1.4 million tonnes of crabs have been harvested by humans every year for consumption. Take a tour with us to explore more about different types of crabs.

A Guide To The Different Types Of Crab

According to the studies conducted, there are approximately 4,500 species of crabs that are existing under the water. These bottom dweller species vary in size, shape, color, and habitat. Here we have compiled a list of some of the common species of crabs along with their distinctive characteristics.

They are commonly named “Rock crabs”, the famous water creature of the cold waters of the Northern Pacific Ocean, Atlantic Ocean, Japan, Canada, Maine, and Alaska. They have long legs just like the legs of the spider. Due to their long legs, they are given the title of Queen Crab. The best harvesting time for Snow Crabs is from April to November. They measure a length of  6 inches weighing up to 3 pounds. They can survive for only 20 years.

They are the largest member of the crab family which is why they are titled the “King Crab”. These species are found living in the coastal regions of Japan, Alaska, Russia, Australia, Argentina, Chile, and Canada. They weigh 10 to 15 pounds and are 5 feet in length. The best time to harvest King crab is from October to January.

As the name indicates, they are of royal bluish color which attracts the people’s attention. They are also known to be the best swimmer in the family. The maximum size is 3.5 to 5.5 inches and is 9 inches wide. The best time to harvest these species of crab is from April to December. The meat of Blue Crab is rich in protein and low in fats.

These species of crabs are common along the Gulf of Mexico, Coastal regions of North America, and Belize. They are 5 to 6.5 inches in length maximum but their bear little meat. Rather than meat, the Stone crab is famous for its claws as they are large and meaty, once its feet have been harvested, they are pushed back into the ocean where they can redevelop the harvested claws. The suitable time to harvest the Stone crabs is from October to May.

The Dungeness Crabs are spotted mostly on the Western coast of North America, California, Mexico, and Alaska. These crabs have a purple-colored hued shell which is a distinguishing feature. They can reach a maximum length of 10 inches, approximately 6 to 7 inches in width, and weigh nearly 1.5 to 3 pounds. The harvesting season of Dungeness Crabs is from December to July.

These crabs belong to the family Xanthidae which includes extremely toxic crabs. Commonly they are called Toxic reef crabs, Mosaic crabs, or Shawl crabs. They have claws tipped black. The toxicity of crabs is due to their diet. Though they do not have spines, and teeth to bite, therefore a person can be poisoned by consuming them. They store toxins in the eggs or muscles such as tetrodotoxin and saxitoxin, the 2 most deadly poison in the natural world. A milligram of which is enough to kill a human.

These species of crabs are found living in the coastal regions of the Indo-Pacific Oceans, Southeast Asia, and Australia. The shells of these crabs are oval-shaped, black-colored, and have yellow and white patterns on the top. They are 4 inches or 10 cm long at maximum. They cannot swim, instead, they have walking legs that allow them to walk on the floor of the ocean.

Coconut Crab is the largest terrestrial crab species, not only this it is the largest arthropod live in the world. They are commonly spotted along the Indo-Pacific Ocean, Africa, and the Eastern Pacific oceans. They have long legs of 3 feet but are strong enough to lift a 62-pound or 28 kg heavy object. They are named Coconut crabs because they feed on coconut and are their favorite food item. They can climb trees and hunt their prey. Other than coconut, they include fruits, seeds, nuts, birds, rats, and animals in their diet.

The largest crustacean that lives on the Planet Earth is the Japanese Spider Crab. These species can reach a length of 16 inches or 0.4 meters in length. As they are decapods, so the length of each leg is about 18 feet or 0.5 meters, incredible! The weight of the enormous creature can be measured at about 42 pounds or 19 kilograms. They are orange to whitish, the coloration helps them to blend with the rock near the ocean floor. As the name indicates these crabs are native to Japan and prefer to live at the depth of 50 to 500 meters with a water temperature of 10o C.

Pea Crabs resemble the size of peas, they have a maximum length of 0.75 inches or 0.02 meters. These species are native to the coastal waters of the Atlantic Ocean, Chesapeake Bay, and North America. They have unique coloration – the female is pink in color whereas the males are brown colored.  They do not live openly in the ocean water they live in the mantle cavity of mussels, clams, scallops, and mollusks.

All over the globe, there are about 4,500 species of crabs have been living in the ocean and seas. These species of crabs vary in shape, size, and habitat depending upon the type of crab. Some species of crabs are used as most favorite seafood, some are highly poisonous species, and some are extremely large or small in size. Some crabs are named according to their environment. This description explains that each species of crab have distant characteristics which distinguish them from each other. If you want to meet these incredible creatures, then plan a tour to visit a beach.