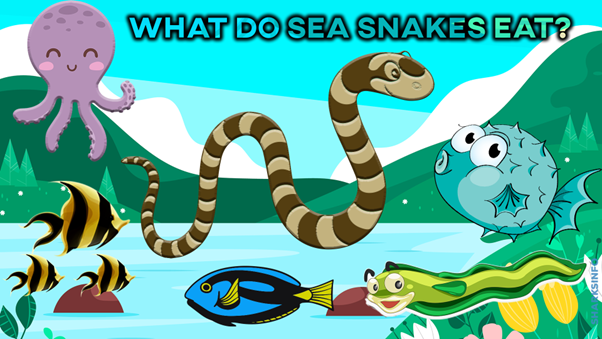 Sea snakes, by their name, show that they belong to marine life. There are several kinds of sea snakes present in the coastal areas swimming and it also looks like normal land snakes… sea snakes prefer eels in all the other food options- we will scrutinize what they ingest.

Sea snakes are found in coastal areas and some even are present on sea floors. On the Pacific and Indian Ocean shores, one can conveniently observe these species from a distance.

As compared to land snakes, sea snakes almost are the same length as land snakes- ranging from 3- 5 feet and some are even 9 feet long; all sea snakes are poisonous.

Mostly sea snakes chase their food in coral reefs and are also seen to consume their food near the sea floor. Sea snakes swallow like land snakes but ingest numerous sea animals:

They normally don’t have a nature to hunt down whatever it sees but they only attack sea animals and sometimes humans when they feel threatened. Sean snakes hunt like normal animals hunt their prey when hungry- it devours small fishes, and eels are their favorite.

Sea snakes like land snakes are highly poisonous. Humans should take notice not to go close to snakes on land and even in the water. Never swim on the coasts of the given oceans as many other dangerous animals are on the lookout to find their prey and consume meat. One should do wise actions and stay safe.