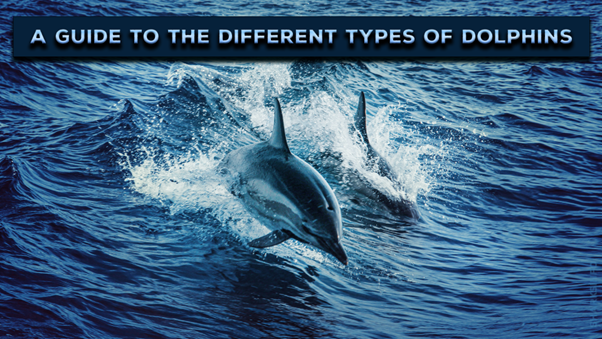 What comes to your mind, when you heard about one of the most socialized species of the ocean – the dolphins? You think of it as a head smiling, carrying a red ball on its nose, and making people happy.

Dolphins, scientifically known as Delphinus delphis are aquatic mammals belongs and order Cetacea. There are millions of dolphins that live under the water which differ from each other based on their habitat and physical appearance. We, in this article, are going to share with you some of the useful guidelines that will be helpful for you to distinguish between different species of dolphins.

A Guide To The Different Types Of Dolphins

It’s beyond your imagination, to count the total number of dolphins that live all over the globe. Primarily, the dolphins fall under two categories based on their habitat and distant features,

Let’s study some of them in detail:

Several dolphins live in the oceans and seas than in the river which is why they are named oceanic cetaceans. 5 of the common sea dolphins are discussed here:

Bottlenose Dolphins are very common in the oceanic world and are the most studied species of dolphins. They are about 64 to 89 cm in length and weigh about 136 to 625 kg. The Bottlenose Dolphins are adapted to all types of habitats including the artificial environment as well. Their greyish skin and thick blunt so can be distinguished from the other species. They can live for  40 to 60 years.

Dusky dolphins are named so because they are the most active type of species and are also called ocean acrobats as they can impress people with their exceptional dives and jumps. They are sighted in the Southern hemisphere, around the open waters of New Zealand, South Africa, and South America. They are 6 feet long and weigh about 200 pounds. They are known to live for only 20 years.

Killer whales are the largest predatory creature in the oceanic world. They are the only predatory animals known to kill the apex hunters of the oceans – the sharks. Commonly they are named Orcas, having a tapering cylindrical body that can grow to about 32 feet and weigh more than 10,000 kg. They have black coloration and large dorsal fins which gives them a unique appearance.

The unique name of this dolphin and their existence in the Antarctic and sub-Antarctic regions make them different from the other species. These dolphins can reach up to 6.9 feet in length and are 110-heavy. They have distant coloration, black from the upper side and white from the underside, along with greyish patterns on the side of the body.

As the name indicates, they are the species of temperate and tropical waters of the Atlantic Ocean. According to the reported data, there are more than 77,000 species of Atlantic Spotted dolphins. They have sturdy bodies that can grow to a length of 7.5 feet and weigh about 142 kg. They are the fast swimmer of the extended ocean and perform incredible acrobats to gain people’s attraction.

Though several dolphins live in the ocean habitat, however, few species adapt to the river habitat. Such species are sighted in the Indus River, Ganges River, and Amazon River. These species of dolphins are enlisted here:

These species of dolphins are completely blind, they move by detecting the direction of light and communicate with each other through ultrasonic sound waves. They have rounded bodies, long beaks, and triangular-shaped fins. Moreover, they are greyish black from the upper side and pinkish from the underneath. These dolphins can reach up to 8.5 feet and are 200 pounds heavy. They are expected to live for 30 years.

These dolphins are found in the Ganges River, Nepal, and Bangladesh. Due to habitat loss and the construction of dams, the population of these dolphins has been declining, and is expected that around 1000 species of such dolphins have been remaining. They can grow to about 7 to 8 feet in length and are 149.7 to 169.6 kg in weight. Interestingly, they are also blind and catch the prey by detecting the ultrasound waves.

These are the largest dolphins that thrive in the river waters and are sighted in Colombia, Peru, Venezuela, Ecuador, Guyana, and Brazil. These dolphins exist in 4 colors – pink, bright, rosy, and greyish pink. They are capable of turning their neck side by side. The length of 5 feet is the maximum and weighs about 185 kg. They feed on turtles, crustaceans, and 50 different species of fish. Despite being the largest species, the population of dolphins has been declining due to human activities.

They are considered somewhat similar to Amazon dolphins as they inhabit the same habitat. They are pink-colored dolphins that have long body but small skull which resembles the Amazon dolphins. They are 2.8 meters long and are 180 kg. According to the reported data, around about 25, 000 species of these dolphins have been left due to human impact; they have been disappearing from the river water.

The most recent type of dolphin discovered is the Araguaia River Dolphin that inhibits Araguaia–Tocantins River Basin, Brazil. There are only 1,500 species have been spotted up till now.  Araguaia dolphins are grey to pinkish and can have 5 to 8.5  feet in length.  These dolphins can communicate through whistles and calls. They are a very active swimmer and it is quite difficult to approach them.

Dolphins have always been portrayed as calm, peaceful, and very friendly creatures of the open waters. There are millions of dolphins living under the water that bears distinguish characteristics However, the species adapt to different habitats as most of the dolphins are found in ocean water whereas some are adapted to river habitats. We hope that the above-mentioned detail is productive for you to distinguish between different species of dolphins.