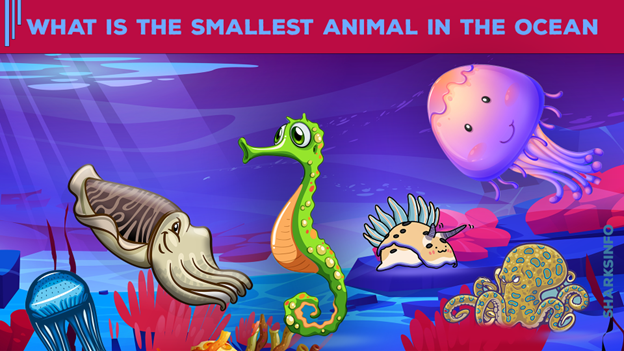 Strange and magnificent creatures live in the underwater world, making it an enthralling place to explore. From the smallest fish to the largest whales, there is an incredible variety of life to be found beneath the waves. All of our attention is focused on the giant creatures of the ocean, such as sharks, leaving aside the wonders of small animals in the ocean who are as important as the large species.

What is The Smallest Animal in the Ocean?

It is believed that the smallest creature inhabiting the waters is the zooplankton, but certainly, they aren’t the only tiny creatures.

While we may not be able to explore the depth of oceans as of now but we can certainly find a few of the smallest animals dwelling in the waters. So, let’s get down to it.

14 Smallest animals in the ocean

As the marine world beholds thousands of creatures, there are not one or two small species, but a lot more than we can imagine. Nevertheless, we will be looking at some of the smallest species we have discovered surfing in the waters.

The smallest animals in the ocean include some very tiny creatures such as copepods, protozoa, and krill. All these are referred to as zooplankton. These animals are so small that they are often barely visible to the naked eye. Some of the tiniest faunae in the ocean are also some of the most important, as they are a key part of the food chain.

In the world of Myxozoans, estimates suggest there are at least 30,000 species, and they all typically range from 10 – 300 μm in size. During their evolution from microscopic parasites, myxozoans lost many genes involved in multicellular development and coordination. Myxozoans are endoparasites whose life cycles involve an intermediate host, such as a fish, which explains their complex life cycle.

In the Pinnotheridae family, the pea crab is a little crab that lives as a parasite, with the male reaching 0.3 inches and the female 0.8 inches. A variety of hosts are used by pea crabs, the most important of which are mollusks.

As a result of their small size and extreme camouflage, pygmy seahorses are nearly indistinguishable from the fish in their habitats. They take the color of the corals they live on. Typically, they grow to be between 0.55 and 1.06 inches in length.

You may not have thought of seeing a shark making its name in the list of smallest animals in the ocean, as sharks are portrayed as giant beasts. But, here it is, the smallest shark species named the Dwarf lantern shark, with a maximum length of 7.9 inches. The creature has only been spotted a few times off South America’s northern tip.

The Irukandji jellyfish is an incredibly small, translucent jellyfish that is found in tropical waters. It is one of the most venomous creatures in the world, and its sting can cause severe pain and even death. There are several species of Irukandji jellyfish, but the most common is the Carukia barnesi.

Dinoflagellates are found in marine and freshwater environments, and some can even live in the soil. Photosynthetic organisms are often found, but others are heterotrophic, obtaining energy from other organisms. Some species of dinoflagellates are known to cause red tides, which can be harmful to marine life and humans.

The Transparent goby is a type of goby inborn to the Western Pacific. It typically inhabits areas of coral reefs and prefers areas of high water flow. A specimen of this species can grow up to 7-8 centimeters in length.

A species of dragonfish that is found in deep waters in the oceans of the world. Female black dragonfish can reach 16 inches in length, but males cannot reach more than 2 inches in length. Photophores, which produce light, are found in the Common Black Dragonfish, just like in many deep-sea fishes.

Mysis Shrimp are small, translucent shrimps that are popular as a food source for both freshwater and saltwater fish. They are also used as bait in many fishing applications. Mysis Shrimp are high in protein and fat, making them an excellent food source for many different fish species. The size of them can vary from a few millimeters to as big as an inch.

The blue-ringed octopus is a small, venomous cephalopod found in tide ponds and coral reefs. It is recognizable by its bright blue rings and spots, which are a warning to predators that it is poisonous. The blue-ringed octopus is shy and retiring, but it can be aggressive if provoked. Its venom is strong enough to take away the breath of a human, and it should be treated with respect. Species vary in size, but they generally range from four to 20 centimeters in length.

Nudibranchs are soft-bodied, marine gastropod mollusks. They are characterized by their colorful, often intricate designs and are found in warm waters around the world. Nudibranchs are unique in that they do not have a shell but, instead, have an external skeleton made up of plates and spines. It is possible for them to grow from as small as 0.25 inches to as large as 12 inches.

The ocean is home to a variety of small animals, including shrimp, crabs, and plankton. It includes some fascinating creatures as well, such as dwarf lantern sharks, blue-ringed octopuses, sexy shrimp, and many more. These creatures play an important role in the ocean ecosystem, providing food for larger animals and helping to recycle nutrients. Although they are often overlooked, small animals are an essential part of the ocean’s food web.