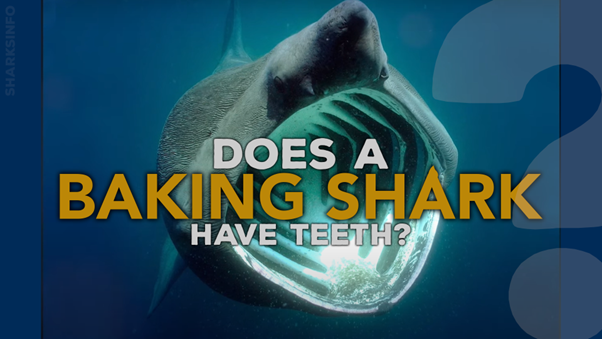 A passive filter-feeder, a basking shark is often questioned about its teeth. Does a basking shark have teeth? And if yes, then what purpose do those teeth serve? These are some questions that intrigue people’s interest. Let’s find out if this gentle giant has teeth or not.

Does A Basking Shark Have Teeth?

The teeth of basking sharks are very small and conical in shape which they do not use for feeding or chewing. But these teeth are used during mating, as they hold onto their partner via these teeth. As they are filter-feeders, that’s why they lack long and pointed incisors.

What Does A Basking Shark Eat?

Basking sharks have large bodies but you’ll be surprised to know that they are filter-feeders and do not consume other animals to satisfy their hunger.

Basking sharks majorly feed on zooplankton and phytoplankton including small fish, shrimp, barnacles, larvae, and small jellyfish. To maintain their body weight, they consume millions of plankton every day.

They swim with open mouths in which the food passes through with the waves of the water and the gill rakers in their bodies filter tiny planktons for them.

No. Basking sharks are of docile and passive nature and thus do not attack humans. Humans are not on their menu too so they do not pursue humans with this intent as well. However, if they are agitated or feel in danger they might bite humans which can cause serious injury as they have a very strong biting force.

It is completely safe to swim with basking sharks keeping in mind that they are friendly sharks and unless provoked, they do not pose any danger to humans.

Basking sharks do have teeth but these teeth are very tiny and conical in shape which they do not use for feeding purposes and they hurt humans. They are filter-feeders and are of passive nature and like to consume plankton and bask on the shore.